For most of us a monitor is important, but we only need it to be of standard quality. However, for those with photography needs and video editing tasks, the exact colors become vitally important. Now HP announces two new models of its DreamColor display, adding 27 and 24-inch versions.

“The HP Z27x and Z24x displays for PCs and Macs feature HP’s second-generation DreamColor Engine and provide up to 1.07 billion on-screen colors, achieving color error so small that it is not discernible to the human eye.”, the company announces.

According to HP, the new displays include up to 60 percent more pixels, contain up to a 4,000 percent increase in the internal color palette and are up to 57 percent thinner. The company claims three times to color accuracy over previous models, an ethernet-based remote management with an integrated web server that provides control of the display, and an SDK that allows customers to fully integrate the HP Z27x into their color workflows. 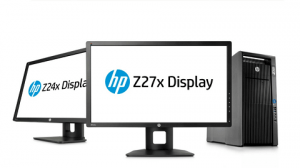 Both monitors are available now, retailing for $599 and $1,499 respectively. Earlier this week, HP announced its latest addition to the laptop family, but this time, instead of Windows 8 or 8.1, the little  notebook is running Chrome OS.

The little Chromebook retails for $279 and can be purchased now from the Google Play store. For a first look in images, scroll down to view all of the pictures. What if you want to do some work but also want to play some games? What if you are traveling and can carry a laptop or a tablet, (but don’t want to juggle both)? You are going to have to make a decision between them.

Or, you could bring the HP ENVY x2 with you. Hewlett-Packard has created a handy device that can function as both a laptop and a tablet. It’s twice the fun! Use it as a laptop, or slide the tablet off of it and take just that part with you. The price starts at $849.99.

Here’s a quick look at the specs:

The cloud is definitely where it’s at right now, but what if you don’t like the idea the idea of Google, Dropbox et al looking after your data? Then you might be interested in a Pogoplug, which allows you to create your own cloud storage that’s only limited by the size of the hard disk. A Pogoplug is a hardware gadget that connects USB storage devices to your local LAN and then makes the space available across the Internet, effectively creating a personal cloud. The data is stored in your control and if more storage is needed, plug-in a bigger hard drive.

On review here is the Pogoplug Mobile, the 3rd generation of Pogoplug device from Cloud Engines. It offers a single USB port plus an SD card slot along with the network port and power socket. Newer Pogoplugs come with USB3 ports, but as the maximum speed of the Pogoplug cloud is always going to be the speed of the Internet connection, the faster transfer speeds of USB3 are unlikely to be a significant benefit. For testing, I used a 64 GB memory stick, rather than a hard drive, which means that the unit will run silently with minimal power consumption. The Pogoplug website has downloads for Windows, Macs and Linux, and the relevant app stores have versions for Android, iOS, Blackberry and legendary WebOS. I was able to try the Windows, Linux, Android and WebOS versions. The Windows version connects to the Pogoplug and presents it as a drive letter, allowing most Windows applications to use the Pogoplug transparently. The Pogoplug software has additional backup functionality as well, which may be useful for some people. The Linux version is command line only but anyone familiar with Linux will have no trouble getting the Pogoplug mounted into the filesystem.

The Android app is simple and straightforward with a couple of nice tricks up its sleeve. Broadly you can browse files in a directory fashion or you can view music, photos and movies in a tag or meta-data based fashion, As expected, there are viewers and players for the media, though movies get handed over to the default app rather than playing within the Pogoplug app. The music player is basic and has one really irritating flaw; it doesn’t seem to be able to pick up the track number from the mp3 files and consequently orders tracks alphabetically when playing albums. This really needs to be fixed. Performance-wise, the Pogoplug is always going to be limited by the upload (rather than download) speed of the broadband connection when outside of the home. This usually meant a little bit of buffering before playing music but once the playback got underway, there was rarely any stuttering. There were occasional times when folders refused to refresh but my suspicion is that any problems were down to the local data connection on my phone rather than a problem with the Pogoplug. YMMV. Inside my home, the performance was excellent.

In common with other social and cloud apps, the Pogoplug app has automatic uploading of pictures and video from the devices camera. It’s also possible to set the folder where the uploaded images are to go. Frankly, this is brilliant as my wife is hopeless at remembering to copy photos off her smartphone so by setting up the Pogoplug app on her phone, any photos she takes get automatically transferred. On occasion, a photo would sometimes fail to completely upload; again I suspect the loss of 3G connectivity than any fundamental problem, but the error checking could be improved. It’s also possible to upload any image from within the photo Gallery app.

As with most cloud solutions, you can also share with friends and family, using either the app or the web interface. It’s straightforward – select the folder you want to share, select who you want to share with and an email is sent to them with the relevant link. It’s an easy way to share photos of Junior with grandma and grandpa.

Any downsides? Only two that i can see….first, there’s no direct integration with any other apps that I could find. Quickoffice and other office apps typically allow access straight into Google Drive or Dropbox but none seemed to work with a Pogoplug. Effectively I had to download a Word doc to the phone, do my edits in QuickOffice and then upload the doc back to the Pogoplug. Not slick.

The second is that when I was at home and on the same subnet as the Pogoplug, Internet access to Pogoplug’s servers was still needed, presumably to check authorisation privileges. Normally, it’s not going to be an issue, but it would be handy to have a way to bypass this when working locally and the connection to the Internet goes down.

Overall, the Pogoplug is a handy device that gives you control over your data rather than entrusting it to a megacorp. A few glitches spoil what is otherwise a neat little solution that potentially gives as much data storage space as you need, without paying per GB per annum. For the low cost of the Pogoplug unit (about $50 / £35), it’s a bargain.

Disclaimer – this was a personally purchased device.

When HP purchased Palm for their webOS technology there was a lot of controversy with many people wondering what HP was thinking, while others calling it a great deal.  The former turned out to be right as HP proceeded to release a webOS-based tablet and then pull it off of the market almost immediately, even selling off the remaining devices at fire sale prices.  But now the hardware maker has unveiled a new open source version of the operating system called Open webOS.

Open webOS 1.0 comes with all of the core apps built in, and the Enyo 2.0 framework has hooks that developers can use to deploy the software on a wide variety of platforms. To illustrate this, Steve Winston, HP’s chief webOS architect, shows webOS running on an HP Touchsmart PC in a new video (posted below).

The new release still lacks support for Bluetooth, multimedia playback, and advanced network management.  That leaves it severely crippled at this point, but HP has promised that all of this will come in a future release.  If you care to try it out then I would certainly recommend only running it in an emulator at this point.