Music is important to most of us, although our tastes vary, sometimes greatly. From pop, rock and country to classical, Celtic and reggae, we’re all over the map, but all want good sound and sometimes we want it loud. Raycon has unveiled at CES 2022 its new sources for listening to all of your tunes.

First up is the Power Speaker Ultra, which lets you bring the club wherever you go, with awe-inspiring lighting effects, customizable EQ and multi-link mode for connecting additional speakers.

Release dates for these two products have not been announced yet, however, pricing has been, with the speaker carrying a tag of $399.99 and the boombox weighing in at $99.99. You can keep an eye out for both Raycon.

Do you bike? I don’t mean Something with Harley Davidson or Indian written on the tank, although those fun also. Yes, I mean a bicycle, perhaps a mountain bike; they’re a lot of fun and seeing your ride in hindsight is enjoyable also. Maybe you’ll see where you went wrong, what caused that crash. Although, to be honest, this is more geared for those who do most of their riding on roads as opposed to trails.

The new line of portable cameras from Apeman is called Seeker. It features a dual screen removable action camera with built-in safety features.

What does that entail? Well according to the company’s product announcement at this year’s CES, “The SEEKER R1 aims to address the vulnerability of every cyclist by providing the rider with a clear view of any incoming vehicles from the back.  SEEKER R1 is easy to install and can be mounted onto your bicycle in 3 simple steps. The R1 features the new SEEKER Smart Tail Light which combines an intelligent brake light system, an automated taillight and an anti-collision laser bike lane.  The SEEKER F1, which features a mountable front facing camera, will debut alongside SEEKER R1. It sports a powerful headlight with adjustable light settings, to further enhance your visibility even in the dark.”

No price or release date have yet been announced yet.

Mimi develops and licenses science-based hearing enhancement technology to B2B customers including electronic device manufacturers, streaming providers and hearing aid companies. Mimi’s Sound Personalization technology works by assessing the listener’s hearing ability in minutes with the Mimi Hearing Test. After the test, a Hearing ID is created and the patented audio processing automatically adapts all audio in real-time. Once completed, the listener’s Hearing ID is stored in the device, adjusting the sound to the user’s unique hearing profile whenever they listen. As a result, more sounds become audible again, and details otherwise lost are restored, creating a more immersive and intelligible audio experience.

The company finished 2021 on a strong note, closing a $25 million round of Series B funding led by MIG Capital in a consortium of German family offices and existing shareholders, and announcing several new industry and product partnerships.

Most recently Mimi Sound Personalization has been integrated into the following products:

Cleer Audio’s new Ally Plus II, true wireless earbuds will offer users in the United States the ability to assess their hearing health and enjoy an enhanced listening experience through Mimi Sound Personalization.

CEVA will bring Mimi’s advanced hearing IP to its Bluebud wireless audio platform and help lower the entry barrier for the development of assistive hearables and TWS headphones.

Goertek, with Mimi Hearing Technologies, will provide a mass market solution to enhance performance and enable sound personalization for its customers in the audio market.

“Mimi Hearing Technologies’ mission from the start has been to make people’s health the main focus of their listening experience,” said Phillipp Skirbanowitz, Mimi CEO. “This is a huge market — we estimate more than 92 million assistive hearables will ship in 2024 and anticipate smart hearable technology will be adopted by the majority of TWS earbuds and headsets, further opening up the market for sound personalization software. This market is going to grow very, very quickly, and is ripe for change.” 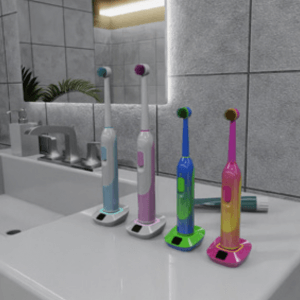 Wi-Charge, the leader in long-range wireless power solutions, announces that it has been granted the CES 2022 Innovation Award in the Health and Wellness category for a wireless powered electric toothbrush charger, supported by its novel patented over-the-air wireless recharging station.

This is the fourth time We-Charge has won the CES Innovation award, highlighting the wide range of Wi-Charge over the air charging supporting different products and categories. Previous awards include the CES 2018 Best of Innovation Award in the Smart Energy Product category for its full room wireless-power coverage powering smartphones, the CES 2019 Innovation Awards, in the same smart energy category for a smart speaker wireless power kit (like the Amazon Echo and the Google Home) and CES 2021 Innovation Award for a wirelessly powered battery pack for XBox controllers.

The CES Innovation Awards program organized by the Consumer Technology Association (CTA) is an annual competition honoring outstanding design and engineering in consumer technology, ahead the CES annual conference.

Wi-Charge provides a range of long-distance wireless charging solutions based on a patented and field prove-infrared technology that is safe, eco-friendly, and easy to deploy. Leveraging its innovative long-range IR-based wireless charging platform, Wi-Charge provides power to various verticals and environments, including the home, retail, and business environments, industrial IoT devices, and more.

According to research from Markets and markets, the global wireless charging market for consumer electronics applications is expected to reach $13.4B by 2026, with a CAGR of 24.6.The driving force behind this growth is the widespread adoption of electronics for personal and commercial use and the development of IoT.

“We are honored to receive the CES Innovation Award for a wireless electric toothbrush charger enabled by our over-the-air charging platform,” says Mr. Mor, Wi-Charge Chief Business Officer. “The inspiration behind its creation was the fact that during the pandemic, many people renovated their houses and bathrooms – but regardless of how much they invested in renovations, bathrooms were left with messy power cords. Brands and users approached us with a request to solve that which we were happy to provide.”

“This product highlights the exponential thirst for over the air charging solutions: an average home can hold tens of a battery-powered devices, including new smart and mobile devices that are becoming a cornerstone of modern life, which are a challenge to recharge and bring clutter of hazardous power cords and Wi-Charge solutions solves this.” 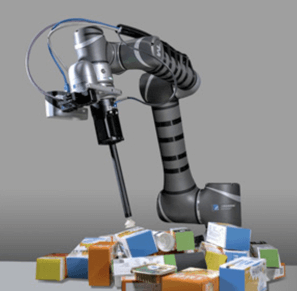 ITRI’s featured technologies include the RGB-D AI Robot, a CES 2022 Innovation Awards Honoree, the first collaborative robot that integrates smart 3D vision as a built-in standard; the Autonomous Selfie Drone, which flies itself to take the best picture based on advanced photography techniques; and the Interactive Time Machine, which automatically creates a unique real-time full-body 3D interactive avatar and experience combining a user’s motion, 3D model, surroundings and display.

The RGB-D AI Robot, a CES 2022 Innovation Awards Honoree, is the world’s first collaborative robot featuring 3D vision as a built-in standard. The smart 3D vision sensing technology functions as a pair of sharp eyes on a robotic arm. It reduces the size of the sensor by 168 times compared with other robots, while increasing the sensing speed by 38.6 times. The smart 3D vision sensing technology provides automatic three-dimensional scanning on the object area and assists the robotic arm in determining the correct angle of picking up objects based on the shape and placement of the object.

Possible applications of the RGB-D AI Robot include sorting and packaging objects for smart automation in the manufacturing and logistics industries, while it also has potential use in retail or service businesses and healthcare to directly serve customers.

The RGB-D AI Robot also includes self-learning technology to enable fast, high precision, 3D object retrieval, eliminating the need for revising control programs to teach robots to identify new objects, which often takes one to two weeks. Whenever a production line is changed or new materials are introduced, the RGD-D AI Robot can automatically scan tens of thousands of training materials, quickly learning the best handling strategy in less than 12 hours. As the robotic arm becomes smarter, it can achieve auto-learning and recognize the pick-up or suction point for any new object. Consequently, engineering costs are greatly reduced and production efficiency is boosted.

The RGB-D AI Robot has obtained 34 patents in 16 areas and has been transferred to the world’s second-largest collaborative robot brand, Techman Robot, for commercial development, and is expected to reach the market by March 2022.

ITRI’s Interactive Time Machine is the first and only system that creates with AI a 3D interactive avatar from the user’s full body rather than from the face only; automatically generates a younger-looking avatar including the user’s surroundings; and forms a metaverse for avatars to interact with players in real time.

The user can move freely in front of the system, and the 3D model shown on the display creates the corresponding movements simultaneously. The user can interact with a virtual self that looks younger or older, which creates a unique experience that intertwines the real world with the virtual one. Use cases include VR/AR/MR gaming, personal entertainment, teleconferences where people meet and interact with their 3D models, and exhibitions for interactive activities to attract visitors. 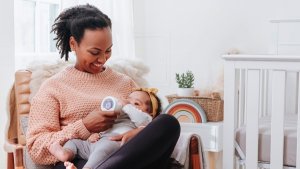 “The nfant Thrive Feeding System applies cutting-edge smart technology that takes baby feeding from guesswork to a science,” said nfant co-founder and CEO Tommy Cunningham, Ph.D. “It will provide moms, dads and caregivers with expert guidance to optimize baby feeding and their care providers with timely analytics to measure thriving and development over the critical first year of life.”

The nfant Thrive Feeding System will support either bottle or breastfeeding. The bottle uses specially designed high-quality nipples with a sensor that measures baby-feeding activity. The sensor output is conveyed via Bluetooth to a smartphone app showing mothers and care providers exactly how the baby is feeding and responds to changes in nipple flow or feeding position. For breastfeeding, silicon pads are placed on the breast during feeding connect to the nfant Smart Sensor and Tracker App to convey real-time data on feeding activity and volume consumed.

“Feeding is most complex skill a baby must master and offers the first insights into a baby’s brain and development says nfant co-founder and nationally recognized feeding expert Gilson Capilouto, Ph.D. “Over 25% of mothers experience feeding issues; nfant provides hard evidence to optimize the baby’s feeding experience and monitor progress.”

Since receiving FDA clearance in 2015, the professional nfant Feeding Solution has been used in the NICUs of over 50 leading pediatric hospitals across the U.S., reflecting emerging consensus that objective assessment of feeding ability during a hospital stay may help identify infants at risk for delay in discharge or readmission. nfant has also been used by leading academic researchers, with clinical results featured in over two dozen peer-reviewed journal articles.

The bottle version of the nfant Thrive Feeding System, along with the full line of nfant Control Flow Nipples and the integrated nfant Thrive Tracker App will be will be available for purchase by early spring 2022. The breast sensor version will be added to the product suite during the second half of the year. 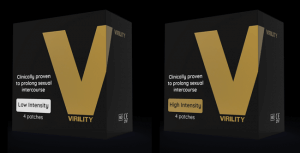 “The Virility Patch creates a paradigm shift in sexual wellbeing, prolonging time until ejaculation and fulfilling the desire to last longer during sexual intercourse,” said Tal Gollan, founder of Virility Medical. “The patch improves a man’s time to climax, creating a better outcome for couples.”

Gollan continued, “Every physical action in the body, including ejaculation, has muscles associated with it. Our technology enhances men’s ability to contract the pelvic-floor muscles and postpone ejaculation by delivering transcutaneous neuromuscular stimulation. The core technology of the patch exists and has been used safely in consumer applications for years.”

The Virility Patch will be available for purchase in low and high intensity options beginning in the Fall of 2022. The discreet, disposable patch is designed from flexible polymeric materials, and conforms to the local anatomy. For product availability news, please subscribe for updates on the Virility website: https://www.virilitymedical.com/newsletter