I’ve used Android tablets for nearly ten years, starting with the Motorola Xoom way back in 2011. I then adopted the Google Nexus series with the Nexus 10, 7 and 9 tablets over a couple of years. After those, I jumped ship to a Huawei M5 10″ before getting a previously-enjoyed Samsung Tab S6, which is a very capable piece of kit.

At times, I feel like I’m the last Android tablet user left. I do like Apple hardware, but I don’t like Apple’s walled garden, the holier-than-thou attitude and I find iOS / iPadOS is too rigid and inflexible for my liking. All too often I try to do something on my daughter’s iPad that would straightforward on my Tab S6 but turns out to be impossible. Go on, change the default app for opening a jpg.

I know that Google’s not been giving tablets much love since ChromeOS became the new poster child and ChromeOS-based tablets started to appear. Of course, ChromeOS runs Android apps but the problem with Chrome devices is the spec. ChromeOS doesn’t need much CPU and RAM to run fast, but that doesn’t mean the screen has to be cheap too. Almost without fail, Chromebooks come with screen resolutions more suited to a 6″ smartphone than a 12″ laptop. 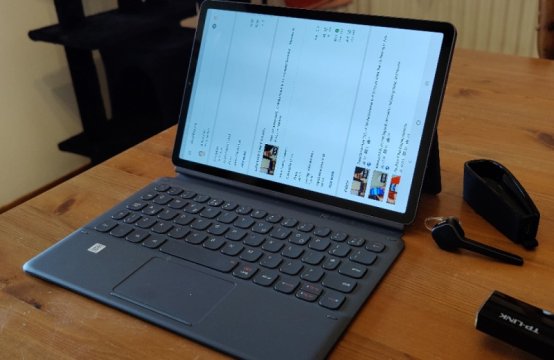 Google’s abandonment of Android tablets came home to me today when I tried to use the YouTube, sorry, the YT Studio app in landscape mode on the S6….and you simply can’t. YT Studio stubbornly refuses to even rotate away from portrait orientation, never mind present a more suitable landscape layout.

Frankly it’s embarrassing that Google can’t even be bothered to make its own apps tablet friendly and it’s no wonder that the best tablet apps are on iPads. Apple didn’t so much win the battle of the tablets as Google failed to turn up.