This page has been updated to only include the liveblog. 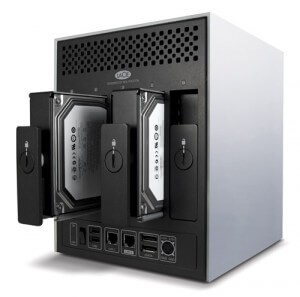 These days, it seems like we’re hearing less about torrents, but the technology is still alive and well, despite making less news. The company hopes to change that over the next couple of weeks as the holidays swiftly approach us.

The company made a very short announcement, letting everyone know about different packages of BitTorrent and uTorrent going for one quarter off the regular price for both Windows and Apple operating systems.

“From everyone on the BitTorrent team, we wish you a safe holiday season and a Happy New Year! From now until 1/3/2022, Windows and Mac-based BitTorrent and µTorrent premium products are 25% off. This includes Web and Classic Pro, Pro+VPN and Ad-Free for Windows and Mac. Enter code 2021Holiday at checkout to apply the coupon code and receive your discount.”

You can visit here to shop.

OnePlus are best known for their smartphones, from top-end flagship killers to value-for-money mid-rangers. In addition to the handsets, OnePlus have had solid range of in-ear headsets, from the original wired Bullets to the noise-cancelling wireless Buds Pro. Today, OnePlus has launched the OnePlus Buds Z2 earphones, which brings noise-cancellation to the Z line for the first time. OnePlus kindly provided a set of Z2s for review in advance of the launch so let’s take a look and, of course, a listen. 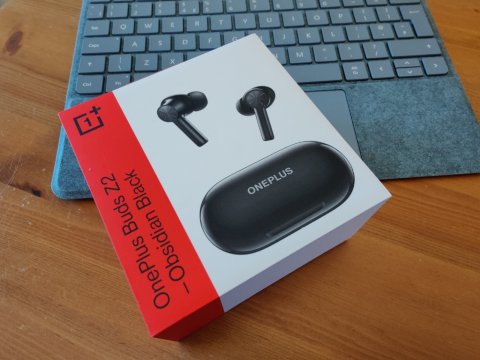 The OnePlus Buds Z2 earphones come in a neat OnePlus red and white box. Opening up, inside are the Z2s in their pill-shaped charging case, small & large ear tips, a short USB C charging cable and some blurb. Available in pearl white and obsidian black, the Z2s themselves are earbuds with a short vertical stem outside the ear.

The Z2 earbud fits snugly in my ear with the middle sized ear tip and it’s worth noting the that the bud part is angled forwards more than in some. I found that for best comfort the Z2 kind of rested in the ear rather than needing to be pushed in. When paired with a OnePlus phone, there are tools under the Bluetooth settings for the Z2s where you can check the fitting for optimum isolation.

The flat surface on the outside of the earbuds is a touch-sensitive button that can be configured for different actions depending on how many taps: single, double and triple. For example, one tap plays/pauses, two taps is next track and three taps is your digital assistant from Google or Amazon. Both ears can be configure independently so two taps on the right ear could be next track and two taps on the left ear, previous track. Touching the button for 3 secs switches between inputs, so if the Z2s are paired with both your phone and your laptop, you can switch between them. 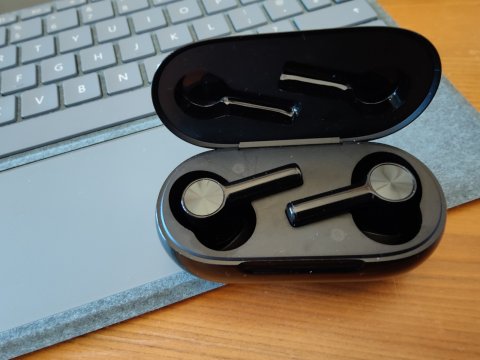 Of course, the Buds Z2 earphones are Bluetooth and it’s straightforward to pair the earphones with any device. For pairing mode, open the lid of the case, press the button on the back of the case for a couple of seconds and the front LED will pulse white while you attempt to connect from the other device. I connected successfully from an ancient HP laptop and used the Z2s for a day’s worth of online meetings. Yawn.

Let’s talk about the active noise cancellation features aka ANC. The Z2s have three small mics on the exterior of the earbuds that monitor external noise and respond with out-of-phase sound to reduce the noise perceived in the ear. It works across the audio spectrum but best works with constant noise. For example, in my kitchen the headphones were superb at eliminating the hum from my refrigerator.

If you have a half-decent ear, you can tell when the ANC is engaged – music is just ever so slightly less bright when it’s turned on. On the whole, the ANC was faultless but I did encounter a one oddity. I was walking alongside stop-start traffic and would occasionally get a sort of gentle thrumming. I think the ANC was having difficulty coping with vehicle engine noise and the change of tone as vehicles moved. It happened twice in about 15 minutes and it never happened any other time. I’m just guessing as to the cause but that’s my guess.

When it comes to audio quality, the Buds Z2 are good. Sound is clear, bass is effective without being overwhelming and treble is well defined. Vocals come across nicely and there’s decent stereo separation. I feel there’s a little richness missing when listening to something like Adele’s Skyfall, but don’t get me wrong, these are definitely some of the better wireless headphones I’ve heard and unless they’re a total hifi nerd, no-one’s going to be disappointed shelling out for these at GB£99. 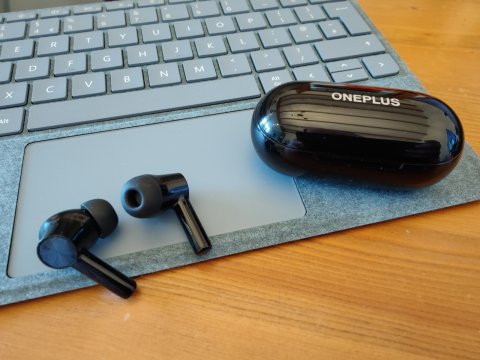 The charging case has a 520 mAh battery which OnePlus claims to give a potential total listening time of 38 hours. That’s with ANC off and each full charge of the earbuds lasts up to 7 hours. With ANC on, the total time falls to 27 hours and 5 hours listening per charge. My experience is inline with the these expectations – I managed a long morning of online meetings without recharging – and several extended listening sessions. The recharge time for the earphones is only 10 mins.

The Buds are also sweat and splash proof with an IP55 rating meaning you can get sweaty at the gym and then give them a quick rinse under the tap. I didn’t try this but I really should work out more often…
There’s also a “find my earbuds” facility which will make the Z2s beep loudly if they’re nearby and you can’t find them.

Drawing this review to a close, the OnePlus Buds Z2 earphones sound good with effective noise-cancellation and a decent listening time further massively extended by the charging case. At GB£99 these are great value for money and I don’t think anyone would be disappointed to find these in their Christmas stocking. Available now.

Thanks to OnePlus for providing the Buds Z2 for review.

Reddit Inc. announced on December 15, 2021, that it is confidentially submitted a draft registration statement on Form S-1 with the Securities and Exchange Commission (the “SEC”) relating to the proposed initial public offering of its common stock.

The number of shares to be offered and the price range for the proposed offering have not yet been determined. The initial public offering is expected to occur after the SEC completes its review process, subject to market and other conditions.

We are in a quiet period, and for regulatory reasons, we cannot say anything further.

The Wall Street Journal reported: “Reddit has been looking to build on the attention it gained at the start of the year its WallStreetBets forum became a hot spot for the individual investors who rallied around GameStop Corp. and other stocks.”

According to The Wall Street Journal, Reddit was sold to Condé Nast in 2006, and the magazine publisher’s parent, Advance Publications Inc., spun Reddit off in 2011 and remains a shareholder. The New York Times reported that Reddit raised more than $1 billion in private capital from investors including Fidelity Management, Advance Publications, Sequoia Capital and Andreessen Horowitz.

The U.S. Securities and Exchange Commission (SEC) has plenty of information about the reasons why a company might decide to go public. One reason, of course, is to raise capital and potentially broaden opportunities for future access to capital.

The SEC also pointed out that a company that goes public “will take on significant new obligations, such as filing SEC reports an keeping shareholders and the market informed about the company’s business operations, financial condition, and management, which will take a significant amount of time for your company’s management and result in additional costs”.

In my opinion, a company that goes public will be forever beholden to its shareholders. It is possible for shareholders to become angry if they aren’t making enough money with Reddit’s stock. Boards could push for changes that the current users of Reddit might not agree with.

Instacart president Carolyn Everson said Friday she will step down at the end of the year, just three months after she joined the grocery delivery service company, CNBC reported. This comes after Seth Dallaire, head of advertising at Instacart, left the company for Walmart in October.

According to CNBC, Carolyn Everson spent more than 10 years at Facebook as its ads chief. She was seen as one of the most prominent women behind Facebook’s COO Sheryl Sandberg, but left the company after Marne Levine – not Everson – was promoted to chief business officer last summer.

The decision to leave Instacart appears to be a mutual one between Carolyn Everson and the company. CNBC reported that Carolyn Everson posted on Facebook that, as her 50th birthday approaches, she will take time off before deciding on her next step.

The ability to quit a job, and then take time off to figure out what to do next, is a privilege. My best guess is that most Instacart drivers are not paid enough to be able to take time off in the way that Carolyn Everson can. The Wall Street Journal reported she had only been at Instacart for four months.

Instacart told The Wall Street Journal that they wouldn’t replace Ms. Everson at this time, and declined to comment further.

Ms. Simo wrote Friday that the company’s current leadership team can take on more roles, and that there was a “mismatch” between Instacart’s priorities and what Ms. Everson was looking for. Ms. Simo wrote that Ms. Everson’s departure gives the company an opportunity to make organizational changes that will put it in a better position.

It is unclear what Instacart will do next. Personally, I think the company should focus on how Instacart can help people who have disabilities to get groceries. We are still in a pandemic, and it can be very risky for people who are immune-compromised to shop in person (where some people aren’t wearing masks). Instacart needs to continue service as it has been – and without an increase in price. 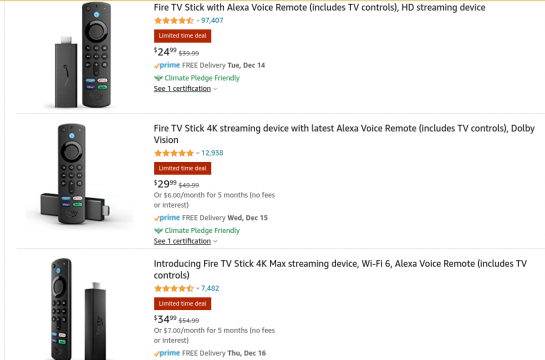 It’s been a bad day for folks who wanted to chill with music, holiday tunes or not. At least if you’re were relying on Amazon Music to provide the tunes. It could be downright scary if you’re relying on Ring services, also owned by Amazon. Ring handles security and one business we spoke with noted that only nine of its 16 cameras were operational, those are the wired ones. The wireless are useless for the time being.

Both services operate under AWS, a high-end cloud-computing system that runs some of the largest systems in the world. Generally, it’s considered reliable and consistent. As of now, Amazon’s latest status update reads:

[2:04 PM PST] We have executed a mitigation which is showing significant recovery in the US-EAST-1 Region. We are continuing to closely monitor the health of the network devices and we expect to continue to make progress towards full recovery. We still do not have an ETA for full recovery at this time

We will continue to monitor the situation and keep you informed.