In a YouTube blog posting, Google has confirmed that it’s the end of the road for Play Music and YouTube Music is the new place to be. Starting in September for the Antipodes and October for the rest of the world, Play Music will stop streaming, though I assume the Play Music app will still play local content. Albums and tracks can be transferred from Play to YouTube from now through December, but come 1st January 2021, Play Music will be gone. 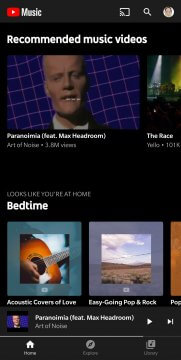 When I heard that Google was closing the doors on Google Play Music in favour of YouTube Music, I wasn’t terribly bothered. I do have a few purchases at Play Music but I’m a subscriber at Spotify and that’s my main source of tunes, so the personal impact is minimal. I’ll get my tracks downloaded to my home NAS and all will be well. I’ve no intention of signing up for YouTube Music.

However, I did wonder about the choice of the YouTube brand for the music service. Undoubtedly, YouTube is a popular and well-known brand but it’s not what I’d associate with quality or trustworthiness. The platform has a healthy selection of clickbait, misinformation and ripped-off content. Yes, there’s some great content on YouTube, but the problem is finding the wheat amongst the chaff. I don’t expect YouTube to be the BBC, but to now suggest that YouTube Music is a purveyor of high-quality legal music is quite a pivot for the brand.

For the purposes of research, I tried out the “YT Music” app on my phone and it’s nothing special. To be honest, I was bit annoyed, because being Google and YouTube, the app tried to pull in my supposed preferences from historical YouTube searches and also tried to make suggestions based on the idea that I was at home and bedtime. I’d really like it, if for once, Google took its nose out of my business. It’s going beyond helpfulness to intrusion.

Sorry Google, but I’m downloading my music and then I’m out of your music service, whatever the brand.