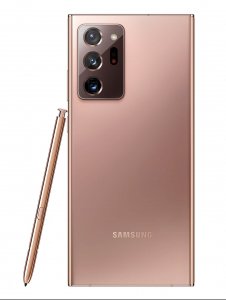 The Galaxy Note devices have always been big and the new phones don’t disappoint. With 4G and 5G variants, the Samsung Galaxy Note 20 has a 6.7″ screen and the Note 20 Ultra has a whopping 6.9″ screen. Both have 120 Hz refresh screen and use the fastest processors in the Galaxy line-up. The S-Pen defines the Notes and the handwriting experience has been improved by reducing the latency between the pen moving and the line appearing on the screen to just 9 ms. The phones meet the usual expectations for high end devices in terms of cameras (12 MP ultrawide, 108 MP standard, 12 MP telephoto, 10 MP selfie) and charging – 50% in 30 mins. Pre-orders are open and prices begin at £849 for 4G and £949 for 5G.

Everything now matches in the Galaxy world and there’s three standard colours. Mystic Black, Mystic White and Mystic Bronze, which Samsung is clearly trying grab as “their” colour. The Note phones come in some extra colours too, Mystic Green and Mystic Grey.

Samsung’s tablets are some of the best Android tablets and the range has been updated with the new Galaxy Tab S7 and S7+ tablets. The S7 has an 11″ LCD screen and the S7+ is a 12.4″ AMOLED screen with the same 120 Hz refresh rate of the Note 20. The S-Pen works on the tablets with similar low latency and the Tab S7s come with three apps that are designed to maximise use of the S Pen. The note taking app looks impressive and has some great features. It works with the Note smartphone too. Prices begin at GB£799 for the S7+ and GB£619 for the S7. That’s the same price as the current S6. I’m currently in the market for a new tablet….hmm. 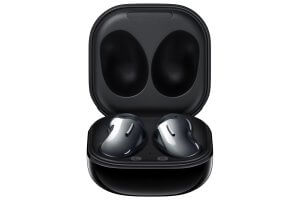 Working with Microsoft, Samsung now synchronises with Office tools like OneNote, To Do and Teams. There’s integration between Windows 10 and the Galaxy devices so that you can use the Android apps on the PC. Samsung DeX now works wirelessly, so there’s not need for a dock, and the smartphone can still do phone things when in DeX mode. It all looks pretty slick. It’s not all about the office though as XBox Game Pass is coming to the Samsung Galaxy Note 20 from 21st August. This brings cloud gaming to the phones for gaming on the go. 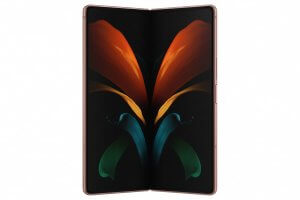 The new Galaxy Buds Live are bean-shaped wireless earbuds intended for all day use. Resting lightly in the ear and come in the new standard colours of Mystic Bronze, White and Black to  match the phones and tablets. The Buds come with active noise cancellation. Battery life is 6 hours and the case can recharge the earbuds for a total of 21 hours listening time. GB£179.

The new Galaxy Watch 3 comes in two sizes (45 mm and 41 mm), and you guessed it, three colours. There’s a high-end titanium version too. The watch comes with health monitoring blood pressure, ECG and blood oxygen level once regulatory approvals have been gained in each country. As you’d expect, the Watch 3 provides activity tracking for walking, running and other sports. There are over 120 fitness programmes that work with the Watch 3 and Samsung smart TVs. Watch 3 prices begin at GB£399.

And finally….The Galaxy Z Fold2 opens up from clamshell to a tablet. Thinner that the Fold, it has a 6.2″ exterior screen but once opened up it’s 7.6″ inside. The hinge has been analysed and improved. Regrettably, it’s only available in Mystic Black and Mystic Bronze. What no Mystic White…? Pre-orders begin on 1st September but price wasn’t announced.