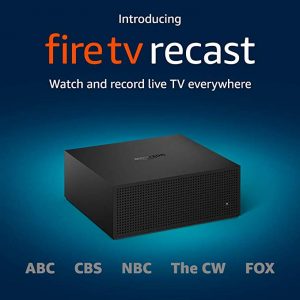 Amazon Fire TV Recast is the long-rumored product that is a Cord Cutters dream come true. This is a unique offering where you deploy the DVR anyplace in your home attach an Antenna to it and then it will record over the air content for playback at a later date.

Amazon says dependent on the Recast model you buy it “can record two to four shows at once, and stream on any two devices at a time.” It then can stream both live and recorded video to almost any Amazon device whether it be a Fire TV, Fir Tablet, Mobile Device, Echo Show etc.

The Amazon Fire TV Recast will have a programming guide that you will access through the connecting devices. This is another nail in the coffin for connected TV. You can tell the cable companies are getting nervous as they offered me digital TV when I recently cut the cord which I declined.

It will be available later this fall in two versions: the two-tuner 500GB model for $230, and the four-tuner version with 1TB of storage for $280. It’s available for preorder now, and ships Nov. 14.

This device from Amazon was one of 13 launched today as part of a bigger play to Amazon Smart devices everywhere.