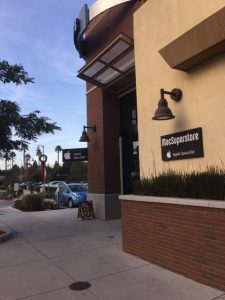 When I moved to San Luis Obispo, CA in 2005, I was concerned about the city’s lack of a nearby Apple Store. But those concerns were quickly erased when I discovered MacSuperstore, an authorized Apple reseller that had been in business since the 90’s. The store offered everything that a corporate Apple Store had to offer, and more, as it wasn’t constrained by the limitations Apple puts on its own stores. MacSuperstore could deal in used products, as well as items from third-party vendors that Apple would never stock in its own stores.

Being the only authorized Apple reseller in the area, MacSuperstore saw steady success. And apparently, the independent store’s good fortunes put MacSuperstore’s locale on Apple’s radar. In 2007, Apple opened the Higuera Street Apple Store in downtown San Luis Obispo. I wrote a (now long-gone) blog post at the time criticizing this decision, as it felt like Apple was moving in on MacSuperstore’s turf and pushing out an established business that you’d think Apple would see as a valued partner instead of a competitor.

The years carried on and MacSuperstore seemed to weather the Apple Store’s encroachment. MacSuperstore even moved into a bigger, fancier location, right next to the new Target store on the west side of town.

But the local market is apparently not big enough for two Apple dealers. Last December, seemingly out of nowhere, MacSuperstore sent this e-mail to customers:

It was August 1998….. the iMac was a week old and MacSuperstore came to life. A little store with big dreams (who else would put “superstore” on a 1,200 sq/ft store)?

Over the years, we’ve dedicated ourselves to providing the best possible customer care along side the world’s best tech products; unfortunately, the industry and the way folks shop has changed a lot, and our efforts to represent Apple have come at a cost. These days, with box stores and online sources heavily discounting the same products, Apple needs the “little guys” less and less.

After much consideration, we have decided to close our doors. In the end, no matter how happy our customers are or great the store looks, a business has to be profitable to survive.

We appreciate the dedication of our customers in giving us a chance to serve you. Seeing the positive impact of technology in the lives of our customers, has been what kept us going these 18 years. It has been a good run, but a necessary ending.

(The e-mail was signed by Shane Williams, founder of MacSuperstore.)

I was shocked to get that e-mail, as I thought the store was doing fine. I was also concerned about some trade-in credit I had remaining with the store. But MacSuperstore stayed a class act ’til the end, giving me cash on the spot for the trade-in credit, no questions asked.

It’s impossible to say just how much Apple’s influence in the local market affected MacSuperstore’s bottom line. Brick-and-mortar shops are being assaulted from all directions these days, and it’s likely MacSuperstore lost some customers to online sellers. Still, during a conversation I had with a knowledgable MacSuperstore employee on one of the store’s final days, he said that Apple has pretty much stopped licensing independent stores as authorized resellers. He also said that, due to Apple’s own requirements, MacSuperstore couldn’t sell their Apple license to a new buyer. MacSuperstore had bought out several other Apple retailers in nearby markets over the years. All of those stores have since closed, along with the San Luis Obispo shop.

I’ll definitely miss having this unique store in my hometown. Of course, the Higuuera Street Apple Store is likely to be there for years to come. But, that corporate store will never have the heart and soul of that independent reseller on the other side of town.