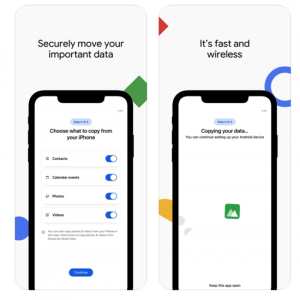 TechCrunch reported that Google has not officially launched “Switch to Android”. It also has not released when the app will become available. The app does not appear on Google’s developer page on the App Store or in App Store search results.

9to5Google reported that it is not clear at this time when Google intends for “Switch to Android” to launch widely, but considering how long Apple’s own “Move to iOS” app has been in the PlayStore, Google’s alternative is already arriving years later than it should have.

Google’s Android.com provides information to people who want to “Switch to Android”. There are four steps in the process:

Get Google Drive: – Make sure you have the latest version of Google Drive on your iPhone, then sign in to Drive with your Google Account. If you don’t have a Google Account, you can create one after you download Drive.

Sign in on your new phone: Sign in on your Android device with the same Google Account you used during backup. And just like that, you’re in. Your data will automatically available in your Google Contacts, Calendar and Photos apps.

Apps that are on the App Store will include an App Privacy section that shows people what data a specific app will grab. “Switch to Android” may collect your location, contact info, user content, identifiers, usage data, diagnostics, and other data. It might also collect diagnostics – that are not linked to your identity.

I don’t think that either side will win this battle over users. Each side is likely to put some effort into convincing people to switch from whatever phone they are currently using to the competitor’s phone. It looks like it is easy to switch from one to the other. I haven’t seen any information about how easy or difficult it might be to switch back.