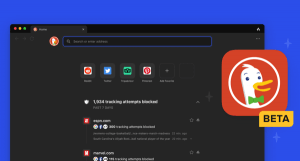 Using an app designed to protect your privacy by default not only reduces invasive tracking, it also speeds up browsing and eliminates many everyday annoyances like cookie consent pop-ups.

DuckDuckGo for Mac gives you privacy by default. With one download you get their built-in private search engine, powerful tracker blocker, “new” cookie pop-up protection on approximately 50% of sites (with that % growing significantly throughout beta), Fire Button (one-click data clearing), email protection and more – all for free. No complicated privacy settings, just simple privacy protection that works by default.

DuckDuckGo for Mac is really fast! By using your computer’s built-in website rendering engine (the same one Safari uses), and by blocking trackers before they load (unlike all the major browsers), you’ll get really fast browsing. It is already faster than Chrome on some graphics performance (using the Motion Mark 1.2 benchmark) and as an additional benefit, by blocking trackers, DuckDuckGo uses about 60% less data than Chrome.

DuckDuckGo for Mac is built for security. Their built-in Smarter Encryption ensures you navigate to the encrypted (HTTPS) version of a website more often, and their tracking blocker means less exposure to third-party scripts that could try to access your data. And they design their product so that all in-app data, like history, bookmarks, and passwords, by default are only stored locally on your device and aren’t accessible to DuckDuckGo.

The beta of DuckDuckGo for Mac has a waitlist. The company is letting new people off the waitlist, and says the sooner you join, the sooner you’ll get it. You won’t need to share any personal information to join. Instead you’ll secure your place in line with a date and time that exists solely on your device. DuckDuckGo will notify you when they are ready for you to join the beta.

Right now, the beta is Mac only. The Windows beta is coming. DuckDuckGo recommends Windows users follow them on Twitter for updates.

Personally, I would like to check out DuckDuckGo for Mac after it launches. Im not a fan of having my data taken without my permission by websites that want to use it for their own financial benefit.

Doing that is very likely illegal, because I live in California which instituted the California Privacy Rights Act (CPRA) in 2020. There have been countless times when a website intentionally makes it extremely difficult to shut off their tracking and cookies. I would love to see DuckDuckGo for Mac shut all that garbage off for me!