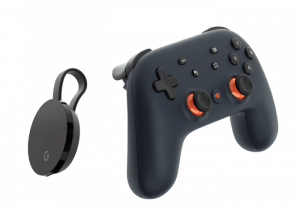 Google announced the first collection of game that are coming to Stadia, the company’s game platform. A limited number of Stadia Founder’s Edition are available for preorder at the Google Store.

The Stadia Founder’s Edition is priced at $129. It will ship in November of 2019 in U.S., Belgium, Canada, Denmark, Finland, France, Germany, Italy, Ireland, Netherlands, Norway, Spain, Sweden, and the U.K. Google is working to expand to additional countries in 2020.

Stadia will include free content, as well as discounts on titles you buy. The first free title is Destiny 2, and it comes with the base game, all previous add-ons, the upcoming Shadowkeep expansion and the annual pass. After your three-month subscription ends, Stadia Pro is $9.99 per month.

You can purchase an extra controller for multiplayer games, or for your laptop. Controllers come in three colors: Just Black, Clearly White or Wasabi. Each costs $69.99.

One of the things that I like about Stadia is that it lets you play games without a console. It also doesn’t make players wait for game downloads. It is intended to be a “jump right in” and play kind of situation.

Additional games are available for purchase, including titles like DOOM Eternal, Wolfenstein: Youngblood, Tomb Raider Trilogy, The Elder Scrolls Online, Baldur’s Gate 3, Assassin’s Creed Odyssey, Farming Simulator 19, and Final Fantasy XV. Right now, it is unclear what each of these games will cost. The interesting thing is that people will buy the games – not rent them.