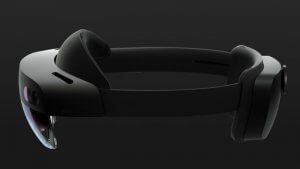 Microsoft introduced the HoloLens 2 at MWC Barcelona. It is an improved version of the original Microsoft HoloLens. Here are some details about the improvements.

Immersion is greatly enhanced by advancements across the board, including the visual display system, making holograms even more vibrant and realistic. Microsoft more than doubled the field of view in HoloLens 2, while maintaining the industry-leading holographic density of 47 pixels per degree of sight. HoloLens 2 contains a new display system that enables Microsoft to achieve these significant advances at low power.

Comfort is enhanced by a more balanced center of gravity, the use of light carbon-fiber material and a new mechanism for donning the device without readjusting. Microsoft improved the thermal management with new vapor chamber technology and accounted for wide physiological variability in the size and shape of human heads by designing HoloLens 2 to comfortably adjust and fit almost anyone.

The new dial-in system makes it comfortable to wear for hours on end, and you can keep your glasses on because HoloLens 2 adapts to you by sliding right over them. When it’s time to step out of mixed reality, flip the visor up and switch tasks in seconds.

Personally, I have a few concerns about HoloLens 2. One is the price. The Verge says it costs $3,500. Another concern is whether or not the HoloLens 2 would scratch the lenses of my glasses. I hope Microsoft tested for that!