When it comes to longevity, electronic gadgets aren’t known for their long lifespan. Manufacturer support, battery life, features and fashion all conspire to consign tech to an early grave. Bucking that trend and heading for a ten year lifespan are e-readers, proving that technology isn’t out of date as soon as the box is opened.

The original Amazon Kindle came out in the US in 2007, with limited availability until 2008, and there wasn’t an internation version until 2009. Meanwhile, Barnes and Noble‘s Nook e-reader appeared in late 2009, with devices coming to the UK in 2012. That’s the one that had the main e-Ink screen above a small colour touchscreen below. 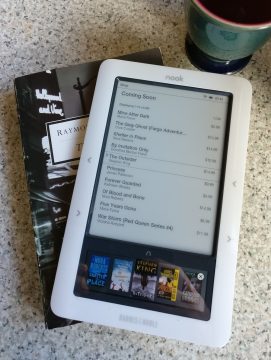 I’ve always been a big e-book fan as I did a great deal of travel on business: I started out reading on a Palm III with books from PeanutPress. I didn’t get a Kindle immediately because I wasn’t fan of only being able to read content from Amazon but when the Nook appeared with more open software, I had one imported from the US to the UK as soon as I could, probably in 2010. I seem to recall that I had to buy pre-paid US-based credit cards to get books from the B&N store as it otherwise rejected my British credit card.

Mind you, the big benefit of the Nook is support from Adobe’s Digital Editions which is used by the library service here in Northern Ireland to lend out e-books. There’s a good selection and they’re all free to read.

Sadly, I received an email last month from Barnes and Noble to say that the first gen Nook was no longer supported from the end of the month. Frankly I was surprised it was still supported at all and on reflection I’ve had my Nook for eight years. Kudos to B&N for supporting the Nook for so long when most devices are obsolete in a few years. Having said that, the last software update was v1.7 in 2011 but you could still buy content through the device. I think Amazon still support the 3rd gen Kindle too so a thumbs up there as well.

Some might observe that the longevity of e-readers indicates that the rapid upgrade cycle of smartphones and tablets is driven by the hardware manufacturers to maximise profit. I would imagine that there’s some merit to this, as in contrast, the sellers of e-readers tend to be sellers of books and it’s the media that makes the money rather than the devices. Additionally, e-readers don’t suffer from feature bloat. They do one thing and they do it well. Why upgrade?

Hopefully I’ll be able to continue to use my Nook for many years while it remains supported by Adobe’s Digital Editions. Thanks Barnes and Noble.