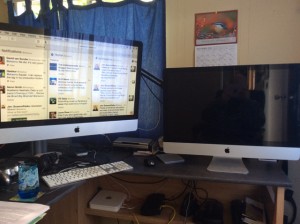 My wife and I are the proud owners of two 27″ iMacs (seen in the photo to the left). Both machines were manufactured in 2011. They’re identical in terms of model and specifications. And both have been afflicted by the same problem – failed video cards.

The first iMac went down in early 2014. I took it to a local Apple certified repair shop where the problem was identified. The repair tech told me that Apple had put in a special “repair extension program” specifically for this iMac model because there are known issues with the video cards that shipped from the factory. Thanks to this program, Apple covered the cost of the repair and the iMac has worked flawlessly since.

The second iMac (seen to the right in the above photo) was acquired used in late 2014 as a replacement to my wife Jen’s aging MacBook Air (which she had mostly used like a desktop computer). A few days ago, this iMac started acting erratically and the symptoms were very similar to the other iMac’s failing video card. We took the second iMac into the shop and sure enough, the problem was diagnosed as a faulty video card.

But the iMac didn’t result in the same outcome as the first computer. This iMac was apparently originally purchased in May of 2011, which means the repair extension program for this machine expired in May of 2015. A scant two months ago. Due to this technicality, Apple won’t cover the cost of the repair, leaving us with a $500 bill after parts and labor. I recognize that Apple was being generous in even offering the repair extension in the first place. But the fact is, these iMacs were shipped with defective parts. It was only a matter of time before the video card would fail. But too bad for us it didn’t break down three months ago? That’s a lousy way to treat a loyal customer, Apple!

And speaking of us as customers. Here’s a rundown of all of the Apple products we’ve owned over the years:

Also, I’m legally blind and I live on a somewhat fixed income while my wife is a freelance writer and relies on her computer for work. The $500 repair bill is difficult for us financially and this is compounded by the fact that Jen is losing valuable productivity time while the machine is down.

So, come on, Apple! Wouldn’t it feel great to help us out and just approve the repair of the bad video card? Doesn’t our longtime patronage of your products mean more than a simple technicality in a warranty program? Please, Apple. Fix this iMac!