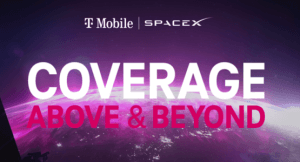 CNBC reported about what T-Mobile users will be able to do with Starlink:

T-Mobile users will be able to use messaging, MMS and certain messaging apps, from remote places across the lower 48 states, Alaska, Puerto Rico and Hawaii and even some remote points in the water.

Eventually, the service will work with voice, Sievert said. T-Mobile plans to include the service in its most popular mobile plans but did not disclose specific pricing.

Musk said the service will work with Starlink’s second generation satellites, which have very large antennae and will be able to transmit directly to a cell or mobile phone.

The service won’t require mobile users to get a new phone. Musk said in or after a natural disaster, even if all the cell towers are taken out, the planned service should work.

The Wall Street Journal reported that SpaceX and T-Mobile said that the new service will use Starlink satellites that SpaceX plans to launch and provide connections to U.S. consumers using wireless spectrum controlled by T-Mobile. The companies said they plan to start with a test of text-messaging services in select markets before the end of 2023.

According to The Wall Street Journal, the new service will use Starlink satellites as cellular towers and transmit directly back to devices on the ground. T-Mobile will set aside a slice of its midband spectrum for these connections. It will use the airwave frequencies in a way that can also be used on its ground-based network.

The Wall Street Journal also reported that some competing satellite operators have raised concerns about the size of that fleet or have said they oppose it. The National Aeronautics and Space Administration, a SpaceX customer, has registered worries that the satellites could cause more collisions in orbit.

According to The Wall Street Journal, the Federal Communications Commission (FTC) would need to sign off on SpaceX’s use of the T-Mobile spectrum. And would need to also secure additional permission from the agency.

Overall, I think it would be a good idea to find a way to make it easier – and less expensive – for people in rural areas to access the internet and/or use their smartphones more efficiently. I’m not sure that Starlink is the right solution, considering the potential veto from regulators.

ArsTechnica reported that the V2 satellites are too large for SpaceX’s Falcon 9 rocket’s payload fairing, which is 5 meters across. The full-size Starlink V2 satellites will need to wait for the much larger Starship rocket to come online.