Ventuz Technology is a company that makes a real-time graphics content creation, authorizing, and playout control software. Blackmagic Design is a manufacturer of creative video technology. The two have teamed up to create a new solution that can be used for 4K Ultra HD broadcasts.

Their solution was on display at NAB. It streams uncompressed 4K video from a HyperDeck Pro 4K SSD recorder or a 4K camera to the Ventuz real-time render engine via a DeckLink 4K Extreme capture and playout card. Ventuz layers channel branding graphics into the live video stream and immediately outputs it through the DeckLink 4K Extreme to a 4K display.

Together, they have created an affordable, off-the-shelf, streamlined solution for people who do on-air productions. The software/hardware integration enables live on-air broadcast graphics without pre-rendering. 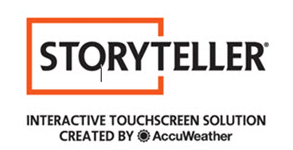 AccuWeather is the “go-to” website for when you want to know what the weather is like. At NAB, they introduced the new StoryTeller AlertID Crime App. It is powered by AlertID and allows newsrooms to access important data that they need in order to keep their audiences well informed.

The StoryTeller app lets newsrooms access data from communications between citizens, law enforcement, and both federal and state authorities. Use it to access national sex offender data and alerts and Amber Alerts issued by local law enforcement. It also will give information about missing adult alerts, national weather, earthquake, wildfire, and hazardous materials warnings and alerts.

The idea is that the StoryTeller app will help newsrooms quickly respond to the breaking crime news and to news about dangerous weather alerts. This, in turn, will help them to keep the public well informed. The information in the StoryTeller app is drawn from over 170 types of local crime-related data, covering more than 140 million people.

People can also use the StoryTeller app with social media. It interfaces with Facebook, Twitter, Google+ and Instagram. Soon, it will also connect with Vine. Newsrooms can use the social media function to sort through the information and pre-screen all posts for on-air use. AccuWeather was at booth SL-6819 at NAB 2014.

Fiilex features two of their lighting kits at NAB 2014. They are the K302 Kit and the new K681 Kit. These professional lighting products have a little something extra for people whose work requires spectacular lighting solutions.

The K302 Lighting Kit has three P360EX lights with enhanced weather protection. The light has an IP-24 rating. It can handle high humidity, extreme cold, and downpours. The Fillex lights are two lights in one. They have color tunability between 3000-5600K.

It is one of their first lights to feature DMX control, which is made possible by the optional DMX Connection Box. One box lets you daisy chain all of your lights together and control them all through one panel. Or, you can use multiple boxes for individual control.

The K302 Lighting Kit includes three P360EX Lights with Barndoors, three AC/DC power adaptors, three Reverse Leg Light Stands, a 15” x 15” softbox, a speedring, and a rolling travel case. It can give you professional results in challenging or varied environments.

The new K681 Lighting Kit has six of their award winning P180E lights. The lights weigh 1.2 pounds each and have 200W equivalent output (40W draw). They are color tunable from 3000-5600K, and all with a CRI >92. The P180E can run off AC or DC power. You can plug them into standard broadcast batteries or even a car charger.

The lights have a life expectancy of over 40,000 hours. The K302 Lighting Kit has the IP-24 rating, which means it can withstand rain, snow, or sleet. Add the optional rain shield and you get IP-25 protection. The K681 Lighting Kit is comprised of six P180E Lights with Barndoors, six AC/DC power adapters, three Reverse Leg Light Stands, two Back Light Stands, a Cold Shoe Mount with Stud and a rolling travel case.

JMR is featuring its product of the month at this year’s NAB. It is the BlueStor Network Storage System. BlueStor is an enterprise-class networked storage server that is powered by euroNAS. It has been built for the film, AV or broadcast professional that needs to upgrade the performance and reliability of their current shared storage environment.

BlueStor is now available in three high performance configurations. They are: Business 64-bit, Premium Ultra, and HA Cluster 64-bit. The BlueStore Networked Storage Server is SES 2.0 compliant. It provides real-time disk activity/failure status for every drive bay and physical user interface controls and indicators for power and cooling status. There are visible and audible alarms, and front panel “on-off” and “reset” switches. 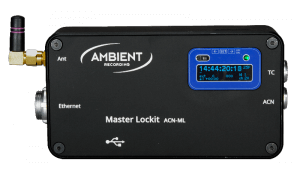 Ambient Recording brings six brand new products to NAB 2014. They are Master-Lockit, ACN-BT, LockitScript, Tonmeister, ASF-1, and ACN-LS. The hardware and software created by Ambient Recording is part of the Ambient Clockit Network System – the most powerful and comprehensive on-set metadata system on the market.

Master Lockit ACN-ML is a powerful time code device. It is the flagship of the Ambient Clockit Network System. It delivers ACN features like 0.0ppm drift, generator buffered time code transceiver mode, and more. It has a built in WiFi router that enables iPads running LockitSCRIPT and Tonmeister apps to automatically sync all metadata.

ACN-BT (The Ambient Beetle) is a Bluetooth dongle that adds versatility to ACN-equipped Lockit devices and the Sound Devices 788T. It works as an alternative to the CL-WiFi. When used with a Lockit device, the Beetle enables wireless connectivity between the ACN and iOS devices.

ACN-LS (Lockit Slate) is a modular time code slate and display. It functions as a highly accurate temperature compensated time code generator. The LED display is double the brightness at less than half of the power consumption of its predecessor.

LockitScript is an iOS app that is designed to quickly organize, simplify and edit documentation. It can import and synchronize preps, schedules, and call sheets (via a free-of-charge Ambient LockitScript account). It can import scripts from Final Draft or Adobe Story. Those are just a few of the features that this helpful app offers.

Tonmeister is an app that has comprehensive sound report features. You can import scripts, call sheets, and slate numbers from the LockitScript app or a LockitScript account. There is an optional CL-WiFi plug-in that lets you arm and name tracks, remote stop record, route inputs, outputs and headphones, and much more.

ASF-1 (The Ambient Sound Fish) is an underwater microphone for professional sound recording. It is waterproof up to100m depth and is made of high quality stainless steel. You can find Ambient Recording at booth C544 at NAB 2014. 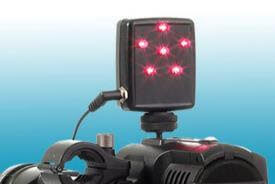 Tally Lights were created by President and Senior Design Engineer of Tally-Lights, LLC, Ted Kazmierczak. The tally lights product provides a simple, reliable, cost effective solution for a common problem faced by production studios. How can you tell if the camera is on? How do you get your talent to look at the right camera at the correct time?

Each Tally Light unit comes ready to plug in and use. There are 7 LED lights on each unit. Six of the lights face the talent, and the seventh faces the camera operator. There is a control knob that adjusts the brightness of the six forward facing LED’s. You can make them brighter, dimmer, or turn them off as needed. Turning them off will not turn off the seventh light that faces the camera operator – only the LED’s the face the talent.

ATX Networks is bringing three of their professional quality transcoding, encoding, and conversion products to NAB 2014. Those products are the VersAtivePro, the DigiVu II, and the Ucrypt.

VersAtivePro offers high quality video at minimal bitrates. It also gives you the flexibility and freedom to add multiple output profiles/bitrates as desired without additional charges or licenses. The VersAtivePro was designed to be the most budget-friendly solution in the professional quality transcoder market. ATX’s VMS element manager enables cluster management of multiple VersAtivePro units.

The new DigiVu II and DigiVu are ATX’s lines of multichannel encoding solutions. They offer cost-effective SD and/or HD encoding, multiplexing, and transmission in QAM or IP. Each product has a low latency encoding mode, MPEG-2 and H.264 encoding, and QAM/IP/optical outputs. The new DigiVu II products can be cluster managed with ATX’s VMS element manager.

The Ucrypt QAM to IP Gateway is the solution for converting encrypted MSO content or clear QAM feeds to multicast IP streams for further processing and/or delivery to an IPTV-based system. It can process 60 or more HD programs in just 3RU. ATX notes that this is more practical and economical than re-encoding from set-top boxes or standalone encoders. You can visit ATX Networks at NAB 2014. They will be at booth SU 6908.