Apple responded by terminating the Epic Games account on the App Store, The Verge reported. If you had Fortnite or Infinity Blade on your iPhone or iPad… well, you don’t have them anymore.

Today we asked the Court to stop Apple’s retaliation against Epic for daring to challenge its unlawful restrictions while our antitrust case proceeds. This is a necessary step to free consumers and developers from Apple’s costly, anti-competitive control.

The tweet included a link of a PDF of Epic’s most recent legal request.

Previously, Epic filed a lawsuit against Apple. Bloomberg reported that U.S. District Judge Yvonne Gonzalez Rogers ruled that Apple did not have to immediately reinstate Fortnite on its App Store. She also granted a temporary order blocking Apple from limiting game developer’s ability to access the Epic Games Unreal Engine.

The judge ruled that Epic’s problem is “entirely self-inflicted”, and that the sensible way to proceed would be for Epic Games to comply with the App Store guidelines and continue to operate as the case proceeds.

There is a difference between Epic’s new request and the previous one. The Verge reported that Epic claims that “Daily active users on iOS have declined by over 60% since Fortnite’s removal from the App Store”. Epic also said that iOS is the biggest platform for Fortnite, and that 63% of Fortnite users on iOS access the game only on iOS.

It remains to be seen what happens next. One thing is for certain. This back-and-forth between Apple and Epic Games is unlikely to come to a resolution that makes both companies happy. I think what it comes down to is whether a judge sees Epic’s loss of customers on iOS as self inflicted or as something caused by Apple.

Battle Royale remains a tremendously popular segment of mobile gaming but these fast-paced action games need speedy systems to make them shine. Consequently, it’s no great surprise that OnePlus has partnered with Epic Games to create a new mobile experience for owners of the OnePlus 8 series of phones when it comes to playing Fortnite. 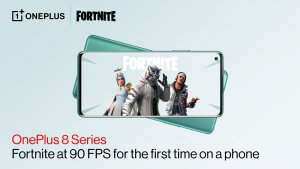 With the rollout currently underway, OnePlus 8 series devices are the first smartphones able to run Fortnite on the Unreal Engine at 90 fps, which is the fastest frame rate ever available for Fortnite on a smartphone and faster than some consoles can manage.

And this isn’t just about making the app “run a bit faster”. It took months of development to bring 90 fps to the OnePlus 8 phones even with the Snapdragon 865 and FluidDisplay. To make life easier for users, Fortnite will be made available through OnePlus’ “Game Space” application for a one-touch easy installation of the Epic Games app.

The rollout is starting in India with world-wide availability soon.

Owners of previous generation OnePlus 7 and 7T series phones will still be able to play Fortnite but sadly only at 60 fps. My personal experience is that even at 60 fps, the OnePlus phones play these games pretty well.

Fortnite, which is made by Epic Games, announced in a tweet that the game now has over 350 million registered players. The tweet continues to point out when the next Fortnite Party Royale will happen, and who it will feature.

Fortnite’s popularity is, in part, because the game provides an interesting challenge for players. Each player needs to quickly figure out what to do in order to be the last survivor. The game is free-to-play, which tends to make parents happy. In addition, the cartoony visuals, and sometimes goofy costumes, make the game fun. But, the biggest draw, for tweens and teens, is that Fortnite is a place where they can easily socialize with their friends.

The Verge reported that the last Fortnite player count stat that was released by Epic Games was in March in 2019. At that time, the game had 250 million players.

One of the things that is very likely attracting players is Fortnite’s Party Royale. It is described as “a new, experimental and evolving space” Unlike in the regular Fortnite, Party Royale is a violence free area. There are no weapons and no buildings. I think this less stressful area in Fortnite would be attractive for tweens and teens who just want a space to hang out with their friends in-game.

Recently, Party Royale has been hosting live shows with a variety of players and artists. These are live events that take place at a specific time. Those who miss it can catch the rebroadcast the next day. It is easy to see how this kind of online, in-game, concert atmosphere would attracted new players to Fortnite.

Epic Games, the creator of the incredibly popular Fortnite game, has reportedly made $3 billion in profits in 2018. This number comes from unnamed sources who spoke to TechCrunch. Epic Games itself did not respond to a request for comment from TechCrunch.

Epic Games had a good year in 2018 as any company in tech. Fortnite became the world’s most popular game, growing the company’s valuation to $15 billion, but it has helped the company pile up cash, too. Epic grossed a $3 billion profit for this year fueled by the continued success of Fortnite, a source with knowledge of the business told Tech Crunch.

Personally, I’m always a bit skeptical of information that comes from anonymous or unnamed sources. However, in this specific case, I think there is good reason to believe that Epic Games made a lot of money in 2018 from Fortnite. While I haven’t played the game myself, I do find it entertaining to watch people stream it.

Forbes reported that Fortnite is free-to-play. Players can choose to purchase a seasonal Battle Pass which allows players to unlock epic loot. In addition, players can spend real world money on cosmetic items. But, no one has to spend money if they don’t want to or cannot afford to.

There is another thing about Fortnite that I believe is increasing its popularity. As Anoop Ranganath posted in an informative thread on Twitter: “Fortnite isn’t a game, it’s a place.” Kids are using Fortnite as a place to hang out and talk with their friends, much like people of my generation used to hang out in shopping malls.

Fortnite is extremely popular. It was created by Epic Games. Fortnite is an open-world survival game where players must collect resources and weapons, fight against other players, and try and stay alive for as long as possible. The game became even more popular after Fortnite released its Battle Royale.

Crain’s Detroit Business reported that Tyler Blevins (also known as The Ninja) is a 27-year-old American Twitch streamer and internet personality. He reportedly is making $500,000 a month on Twitch from his subscribers who watch him to play Fortnite Battle Royale (and other games).

Ashland University added Fortnite to its eSports program for the Fall of 2018. They conducted open tryouts for Fortnite players, and offered scholarships in eSports for up to $4,000 based on player skill level and academic requirements.

So, maybe it isn’t so strange for parents to pay people to teach their kids how to be a better Fortnite player after all. There are now some real-life possibilities for talented Fortnite players to turn their skill into a way to pay for college or a career. It isn’t so different from paying a coach to teach your kid to be a better football player. 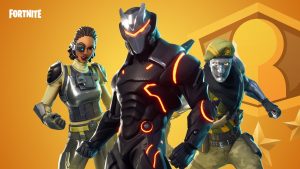 Epic Games is the creator of the Unreal series of games, the Unreal Engine, the Gears of War franchise, the Infinity Blade series, and Fortnite. Epic Games announced that it will provide $100,000,000 for Fortnite eSports tournament prize pools in the first year of competitive play.

The Fortnite Team posted a blog on the Fortnite website with more details.

Grab your gear, drop in and start training. Since the launch of Fortnite Battle Royale we’ve watched the passion for community competition grow and can’t wait to empower you to battle with the best.

In the 2018-2019 season, Epic Games will provide $100,000,000 to fund prize pools for Fortnite competitions. We’re getting behind competitive play in a big way, but our approach will be different – we plan to be more inclusive, and focused on the joy of playing and watching the game.

The post ends by telling players to stay tuned for more details about competitive structures and eligible platforms. It appears that information will be released in the weeks ahead. Fortnite is playable on PC, Mac, Xbox, PlayStation, and iOS.