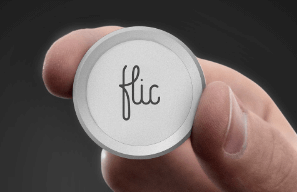 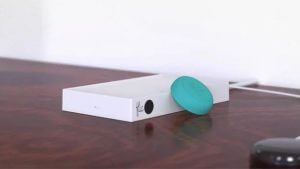 Flic‘s smart Bluetooth buttons will be familiar to GNC readers as I reviewed them back in 2017. To be honest, the buttons aren’t that smart but it’s the clever smartphone software that does all the cool stuff. Consequently, if the Flic button is out of range of the owner’s smartphone, it’s somewhat useless. Fortunately Flic recognised this and announced an Indiegogo campaign for a Flic Hub that would take away the reliance on a nearby smartphone. Todd clicks with Elin to find out what’s new at Flic.

The new Flic Hub removes the need for a nearby smartphone in a home or office environment and lets Flic smart buttons integrate more closely with other automation and process management systems. Flic is looking to grow in the enterprise with customers focusing in the safety and hospitality industries.

The Hub can communicate with more Flic buttons so in theory, there could be hundreds of buttons in a location, and the integrity of the overall system is improved without dependence on the smartphone vendors. This creates a more reliable and dependable platform that enterprise customers are looking for, taking Flic beyond smart buttons.

The Flic Hub is expected to go on-sale shortly.

Flic is a battery-powered Bluetooth push button that can be stuck to a flat surface or clipped to clothing. What makes it really flexible and smart is the accompanying Flic app that elevates Flic from a dumb button to a smart accessory integration with over 100 services, applications and functions. The outer packaging claims that inside is the “World’s Smartest Button” so let’s take a closer look. 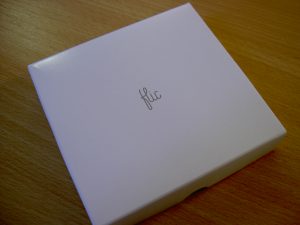 The Flic button comes in a small box which opens up to reveal the button with the clip underneath. The Flic comes in four colours; black, white, cyan and lime. I’m kind of disappointed there’s no red one. A one-off Flic costs US$34.99 / GB£29.99 but the price drops quickly when buying in bulk. A pack of eight at $179.99 gives a unit cost of $22.50.

Flic is covered in a soft silicon rubber and needs a firm push down for a satisfying click – you won’t accidentally press it just by grazing the surface. There is a red LED behind the top surface of the button and it glows through the writing when required. The back of the Flic button unscrews to both change the battery and switch out the flat back for the clip version. 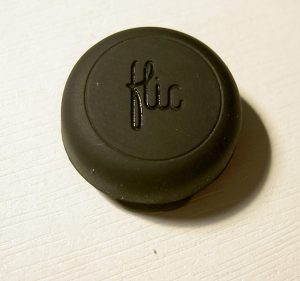 To get going with the Flic button, download the Flic app from the app store of your choice and fire it up. Because of the flexibility of Flic, you have to accept a long list of permissions. On first run, you’ll need to sign-up for a Flic account but once that’s squared away, you get a some advice and guidance on Flics and Tasks. We’ll come back to Tasks in a minute.

You then need to pair your Flic button with the Flic app and give it a name. It’s all very straightforward and the app walks you through the process. Once that’s done, you’re ready to automate your world.

Keeping it simple, a Flic button can be set to initiate one or more Actions. One Flic can run three up to different Actions; on click, double click or click’n’hold. An Action might be “Play Spotify” or “Take a picture”. You can also chain the Actions, so “Play Spotify” can be followed by “Set volume to 11”. 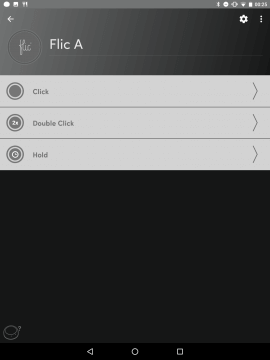 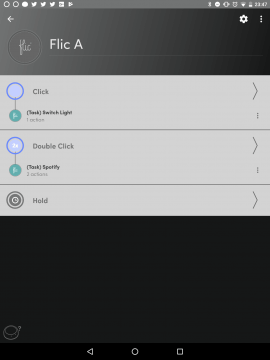 There’s a huge range of actions – at time of writing there were over a 100 gathered in seven categories; Phone Control, Lifestyle, Communication, Music, Home Automation, Fun and Tools. Some of the actions will require configuration before they can be used, e.g. connecting to Philips Hue, and many of the actions offer options, for example, is the front or rear camera to be used? 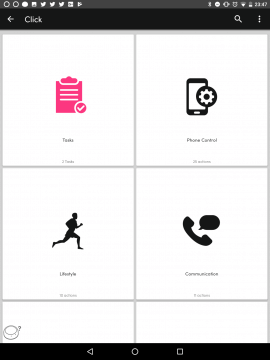 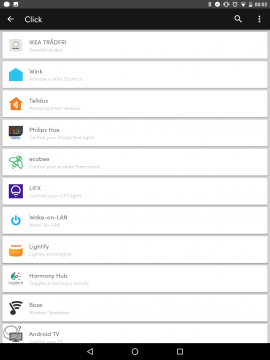 Tasks are a bundles of Actions which allow you to test the Actions without actually having to assign it to a button. It’s handy because otherwise you’d need a button for testing, and if you’ve stuck the only button you have to a surface, it could be inconvenient…think of Tasks being a virtual button.

As a practical example of Flic use, I used the Flic button to manage my smartphone while driving and it works really well. Here’s how…in the car I use my phone for two things; podcasts and navigation. I setup the Flic button so that a single Flic press launched Pocket Casts, set the volume and pressed play, and that a double press started Google Maps. The Flic is stuck on the dashboard close to hand and now I can switch between the two apps without even touching the phone. Handy. 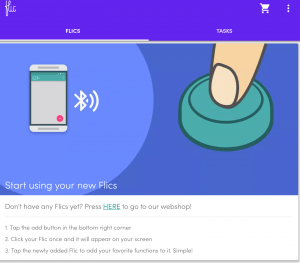 Returning to the hardware, there are two kinds of Flic button, Flic and Flic Single. The standard Flic button works with all aspects of the complemantary app but Flic Single works with only one area such as music or lighting. The name of each Flic Single gives a clue to its area of expertise, with Flic Lights, Flic Music, Flic Selfie, Flic Find and Flic Location, and there’s a stylised logo illustrating use. The Single buttons are a good bit cheaper at US$19.99 / GB£19.99 but are only available in white.

Having played with the Flic button for a couple of weeks, I’ve had a few a few thoughts….

First, these need to cost less. At $35 / £30, they’re pricey enough for rubber blobs, especially if you are buying one or two at a time. Flics are competing with other controllers – compare them with the Philips Hue Dimmer switch at $25. Yes, it only works with Philips Hue, but it’s much more stylish.

Next, there needs to be a Bluetooth-enabled smartphone or tablet nearby for the Flic to work. It’s really the mobile device that’s doing the hard work, so a button on its own is useless. Let’s say I have Flics at home to turn on some lights. If I go out and take my smartphone with me, the Flics don’t do anything until I get back.

Now Flic spotted this too, and they ran an Indiegogo campaign over the summer for a Bluetooth hub that takes the place of the mobile device. A Flic hub certainly goes a long way to addressing the issue and as a bonus, it can handle way more buttons than the phone can.

Overall, there’s no doubt that Flic buttons and the Flic app have a multitude of uses and it’s very much a case of figuring out where to best use it. For me, the best uses I found were around personal configuration. The Flic in the car, the Flic on my desk. Places that were only about me and I’d have my phone with me.

Thanks to Shortcut Labs for providing the Flic for review.

If you’ve followed our CES 2015 coverage at all, you’ve probably heard about Flic, the Bluetooth-enabled programmable button. One Flic button can be configured to perform multiple tasks with a simple series of (up to) three clicks.

Brian was the latest correspondent to stop by the Shortcut Labs booth and speak with a representative of Flic. Using the Flic app, users can program a simple button to do things like move thru music playlists, send GPS coordinates and more. Flic is available thru an ongoing Indiegogo campaign. Pricing varies, depending on how many buttons you’d like to buy.

Interview by Nick of F5 Live: Refreshing Technology for the TechPodcast Network.

Flic is a bluetooth-enabled button. That’s it. But it’s a simple idea that has a thousand uses from taking pictures with a smartphone to autodialling or even working as a personal distress alarm. Nick and Todd go “ah-ha” with Pranav Kosuri, co-founder of Shortcut Labs.

Flic is a coin-sized button that can be stuck or clipped onto nearly anything. When pressed, it sends a signal via bluetooth that is actioned by the Flic app (available for both Android and iOS) and actions include controlling music, dialling phone numbers, sharing GPS position, taking pictures, dimming lights and more. It’s a bit like a local version of IFTTT. Different things can be done depending on the number of clicks or if the button is being held down: one click could be take a picture, two clicks take a video. The possibilities are huge.

The Flic is currently on Indiegogo and $99 gets 5x Flics with delivery in April 2015.

Interview by Nick DiMeo of F5 Live: Refreshing Technology and Todd Cochrane of Geek News Central for the TechPodcast Network.

Configuration, customization and wireless connectivity were big topics at this year’s CES. One product that combines all of these features is Flic, a programmable Bluetooth button.

Chris met with Pranav Kasari, a representative for Flic. Pranav explained that Flic is a programmable button that can be configured, using the Flic smartphone app. For example, a user could press a Flic button once to advance a Spotify playlist. Flic buttons can be programmed for up to three button clicks, so each button can perform up to three tasks.

Flic is currently available thru an ongoing Indiegogo campaign. Pricing starts at $30 for one Flic button.