If you spend any time at all tinkering with computers, it’s inevitable that one day you will have a computer with one set of ports and a peripheral with a completely different set of ports. Back in early 90s, before USB, serial ports changed from 25 pins to 9 pins and you needed a whole bag full of adaptors and gender changers. Or SCSI, which went through a series of connectors faster than you could say Sun Microsystems.

Today, it’s usually video standards that cause the problem, with VGA, DVI, HDMI, DisplayPort and even USB C all trying to get in on the act. Often it’s an older VGA PC trying to connect to a newer HDMI flatscreen TV or an HDMI-only ultraportable wanting to use a VGA equipped data projector. In this case, it’s the former, as I take a quick look at the Topop VGA to HDMI Converter with Audio Support.

As you’ll see from the unboxing video, the converter comes in plain packaging and there’s no branding on either packaging or the converter. In the pack, there’s only two cables, the VGA to HDMI converter and a USB to micro USB cable which is used to power the converter via socket on the back of the HDMI part. The additional power is needed because there’s electronics in the converter to change the picture signal from analogue VGA to digital HDMI. 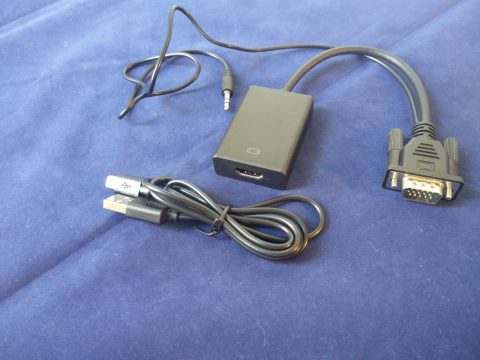 Getting going is simplicity itself.  Plug the VGA end into the PC or laptop and then use a standard HDMI-to-HDMI cable to connect the other end of the converter into the monitor or HDTV. The 3.5mm stereo jack needs plugged into the PC’s sound card or headphone socket and finally the converter needs powered using the USB to microUSB cable.

Turn on the computer and the HDTV. If it’s a laptop, don’t forget to toggle the relevant function key to get the laptop to output to the VGA port. On the TV, switch to the right HDMI input if it doesn’t switch automatically, and Bob’s your uncle as they say.

For me, it worked perfectly first time on an old Toshiba Satellite Pro A120 running at 1280 x 800. The picture quality was good too. I wasn’t expecting much as even directly connected VGA can look a bit fuzzy on a bigger monitor but the Topop converter does an excellent job. Here are a couple of screen shots which aren’t really going to show off the picture quality but if you click through they’ll give you an idea. The converter had no problem keeping up with video either and I was able to watching Netflix and YouTube. 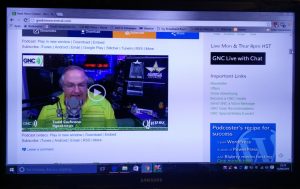 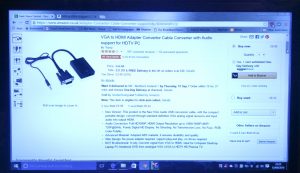 The converter has audio support so sound comes out of the TV speakers. Possibly the only downside of the converter is that the audio cable could be a little longer. It’s around 55cm, which seems fine, but if you have a laptop where the headphone socket is on the front, the cable has to come under the laptop rather than round the side. Other than that, it’s hard to fault and the converter seems well enough made – I tried a little wiggling and nothing came free so QC passed…

Note that this converter will only go from VGA to HDMI. It will not do the reverse, HDMI to VGA, so don’t buy it thinking that it might.

In summary, the Topop VGA to HDMI converter with audio support works well and gives a good picture on the screen. At GB£10.99 it’s well priced, especially if you want to prolong the usefulness of an older computer with a newer monitor. It’s worth it too if you occasionally want to show some digital photos on your big HDTV and like to keep it simple.