As expected, OnePlus launched the brand new OnePlus 10T from Gotham Hall (cue scary music) in New York. During the pandemic, the launch events have usually been relatively short, but for the first post-pandemic in-person event, they took their time: it was nearly two hours long. If you want to watch, it’s on YouTube. Frankly, I got a bit bored: there’s only so much we-took-our-inspiration-from-nature I can take. And as I watch the presentation, part of me is beginning to think that the 10T really isn’t much of an upgrade and that if you’ve got a OnePlus 9, you might as well stick with it. Let’s take a look at what OnePlus are promoting in the specs and how that stacks up. 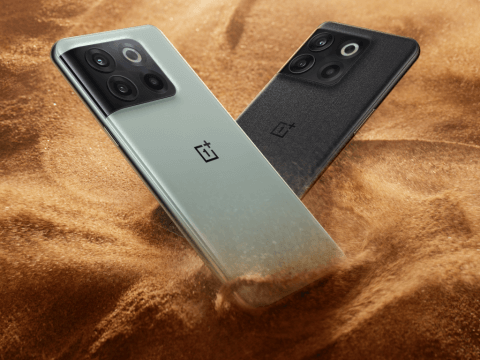 At the heart of the 10T is Snapdragon 8+ Gen1 that gives a 10% improvement in performance and a 30% improvement in power efficiency for both the CPU and the GPU. This is matched with up 16 GB of memory and 256 GB of storage (there’s an 8 + 128 GB version as well). The large memory means that more apps can be held in memory before they’re swapped out and with OnePlus controlling both the hardware and the software, they’ve evolved together for that fast and smooth experience. Software tools, such as the AI System Booster, analyse performance to reduce loading times.

To handle all that performance, OnePlus has developed an ultra thin vapour cooling system that keeps the temperature down. In comparison with other phones, the 10T runs 3°C cooler. For even more cooling, OnePlus have developed a gaming case called the Glacier Mat Case that uses evaporation to dissipate even more heat. In tests, the 10T was 2.3°C cooler gaming with the Glacier Mat Case.

The large 4800 mAh battery is charged by 150W SuperVOOC (in Europe) which charges the 10T by 28% in just 3 minutes. Rather than one single battery, there’s two 2400 mAh batteries. There’s very much an emphasis on safety, with 13 temperature sensors, a special charging chip and the Battery Health Engine to make sure the charging is safe and keeps the batteries healthy over time. It’s rated at 1600 charging cycles which would last over four years, assuming a full charge every day. 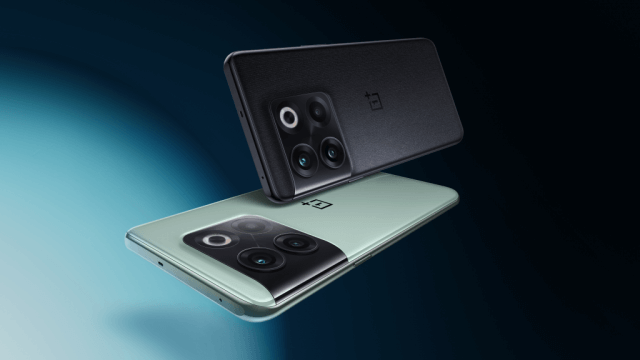 Turning to the cameras, it’s a 50 MP Sony IMX766 with OIS for the main shooter and then two unnamed sensors for the 8 MP ultrawide and the 2 MP macro lens. Round the front it’s a 16 MP unit. As had already been announced, there’s no special sauce from Hasselblad, though the IMX766 is a pretty decent sensor. There are some new features – the Nightscape mode has been improved, there’s Ultra HDR and the new Image Clarity Engine will take multiple shots when the shutter is pressed and then chose the best one. Great.

OnePlus promoted work on the internal aerials and how the 10T reconnected faster after drop outs but by this time I was snoozing. Out of the box, the 10T will come with OxygenOS 12.1 with a water inspired OxygenOS 13 coming later in the year.

And at last we need to turn to what’s missing. First, there’s no alert slider and second, there’s no wireless charging. OnePlus must be confusing the 10T with the Nord phones.

In terms of price, there are two variants and colourways for Europe and the US:

Pre-orders start 3rd August / September 1 and will be available from 25th August in Europe and September 29 in the US (that’s a bit of a wait!). Purchase from OnePlus and other local partners.

While it’s become a little trendy to bash OnePlus after their hook-up with Oppo, I’m beginning to see problems too. Let’s see how the 10T stacks up against the phone it replaces, last year’s 9. Yes, it’s faster with the Snapdragon 8+ processor when compared with the 888 but that’s kind of given as it’s a year on. You can get a bit more RAM (16 GB v 12 GB) at the higher end, but the screen’s pretty much the same. Battery is slightly bigger (4500 v 4800 mAh), there’s superfast charging but I don’t perceive that an additional 6% is going to make much difference and where is the wireless charging? It continues to go wrong with the cameras. On the OnePlus 9, both the main camera and the ultrawide are hefty 48 MP and 50 MP units blessed by Hasselblad but the10T has a feeble 8 MP ultrawide and no fairy dust from the experts. To cap it all, there’s no alert slider. Overall, it’s simply uninspiring. Maybe if you were a gamer you’d appreciate the speed and the cooling, but for me, I want the old OnePlus flagship back.