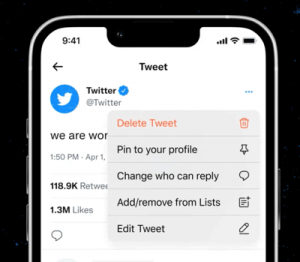 Those who use Twitter, and who desperately want an edit button, might have that wish granted. While the addition of an edit button will likely bring some people joy, I can see ways where it can be manipulated to cause chaos.

The @TwitterComms account tweeted: “now that everyone is asking… yes, we’ve been working on an edit feature since last year! No, we didn’t get the idea from a poll [winking smile face emoji] we’re kicking off testing within @TwitterBlue Labs in the coming months to learn what works, what doesn’t, and what’s possible”.

The poll that was referenced is from Elon Musk’s Twitter account. He asked “Do you want an edit button?” The choices were “yse” (which got 73.6%) and “on” (which got 26.4%). I Should note that Elon Musk now owns a 9.2 percent stake in Twitter.

@TwitterComms also posted a GIF that starts with the Twitter blue bird and a smartphone that features Twitter and shows a window that includes the “Edit Tweet” option.

Twitter Blue is available in the US, Canada, Australia, and New Zealand. It is available as an in-app purchase on Twitter for iOS and Android, or on twitter.com through Stripe.

TechCrunch reported: Twitter has shown a somewhat novel willingness to shape the platform based on user feedback, so it will be interesting to see what happens as the test begins. It’s easy to find strong opinions in favor of or vehemently against editing tweets, but much harder to know at scale most people really want.

Jay Sullivan @JaySullivan (Head of Consumer Product at Twitter) posted a thread about the Edit feature. I think the most significant part of it is the third tweet in the thread: @JaySullivan “3/ Without things like time limits, controls, and transparency about what has been edited, Edit could be misused to alter the record of the public conversation. Protecting the integrity of that public conversation is top priority when we approach this work.”

I can see why people want an Edit feature. Maybe their smartphone changed what they were typing in a way that makes their Tweet unintelligible or embarrassing. It might be useful if you tag the wrong account into a thread of tweets and want to replace it with the correct account.

My concern is that there will be people who tweet: “Click like if you love kittens!” They add a photo of an adorable pile of kittens. This is likely to get a lot of likes. Later, that person could swap out the word “kittens” with the word “guns” and change the photo to match the deliberately manipulated tweet. Hopefully, Twitter will put in place the time limits, controls, and transparency about edited tweets that Jay Sullivan mentioned. Twitter is chaotic at times, and a deceptive Edit will only add to the chaos.