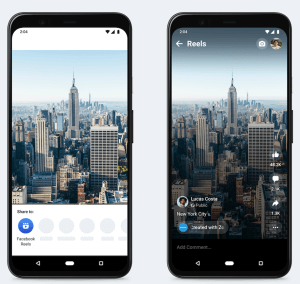 Meta (parent company of Facebook) has introduced “Sharing to Reels. It is described on the Meta for Developers site as “a new way for developers to make it easy for people to share video directly to Facebook”.

Enabling Sharing to Reels makes it easy for people to share short-form videos directly to Facebook. Once integrated, third-party apps will have a Reels button so people can share short videos, then customize with Reels editing tools like audio, text, effects, captions and stickers. Instead of downloading their video content and uploading it later, they can now create and share video seamlessly with one tap.

At launch, Facebook has partnered with Smule, Vita, and VivaVideo who have integrated #SharingToReels and are finding new ways for Creators to express themselves, grow their communities, and reach new audiences.

Personally, I’ve never heard of those companies. I’m also wondering why Facebook didn’t choose to include Instagram which has its own version of Reels (and is also connected to Meta). That seems like the obvious choice!

TechCrunch reported: While Reels first began as a way to directly combat TikTok with a feature inside the Instagram app, Meta also brought them to Facebook shortly after. The company touted during its Q4 2021 earnings that Reels is now its “fastest-growing content format by far.” The company also said Reels was the biggest contributor to growth on Instagram and “growing very quickly” on Facebook, too.

Facebook also did not mention TikTok, which is pretty much all about reels. Why? Engadget may have the answer to that question.

Engadget reported: Facebook is taking another step to encourage users to create original content for its TikTok clone. The company introduced a “sharing to Reels” feature to allow users of third-party apps to post directly to Facebook Reels.

Engadget also reported: Now, with Facebook losing users to TikTok, Meta CEO Mark Zuckerberg has staked a lot on the success of Reels. He said last fall that Reels would be “as important for our products as Stories” and that reorienting its service to appeal to younger users was the company’s “North Star”.