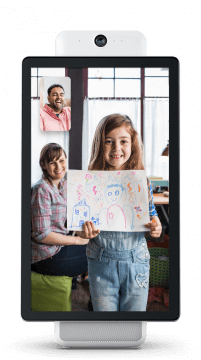 With two models in the range, the smaller Portal goes up against the Echo Show, and a larger Portal+ brings a new form factor to the market. The former has a landscape 10″ screen with the latter plus model rocking a 15.6″ screen that rotates between landscape and portrait orientations.

Facebook’s track record in hardware isn’t great. Remember the Facebook phone, aka HTC First? No, you probably don’t so it’s good to see that both devices are well-designed and look a whole pile better than the original Show.

Having said that, they don’t actually do much other than video chat and media, such as Spotify and displaying photos from Facebook. Amazingly, there’s no Facebook app itself. Amazon’s Alexa is built-in, so all her skills are available to make up for some of the deficit. Friends and family don’t need another Portal to chat and can use Facebook Messenger to take the call.

Facebook goes to great pains to emphasise “privacy by design” and that the camera and microphone can be turned off. Facebook assures us that “Facebook doesn’t listen to, view or keep the contents of your Portal video calls. Your conversations stay between you and the people you’re calling.” I still don’t trust Facebook and this device is in your home listening (“Hey Portal”) all the time.

Facebook goes on to say, “For added security, Smart Camera uses AI technology that runs locally on Portal, not on Facebook servers. Portal’s camera does not use facial recognition and does not identify who you are.” If you are reassured by this, good for you. If not, there is a button on the top of the unit which, when pressed, will physically disconnect the microphone and camera.

Let’s not forget Facebook has a very poor track record on security and the abuse of personal information. Where shall we start?
– Cambridge Analytica
– 50 Million Accounts Breached
– Using 2FA phone numbers for advertising

I think Facebook have made a mistake, pairing the Facebook brand with Portal. My advice would have been to do “Portal from WhatsApp” and majored on the security features of WhatsApp and end-to-end encryption. Facebook might own WhatsApp, but I would have had far fewer concerns if Portal had come from the WhatsApp team.

If you want buy one, pre-orders are open with the Portal is priced at US$199 and the Portal+ comes in at $349. There’s a special offer on buying two Portals with $100 off. Pre-order here with deliveries expected in November. US only at the moment.