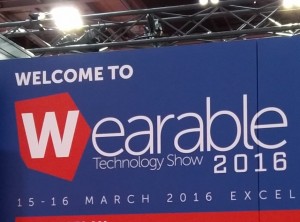 Earlier this week, GNC visited the Wearable Technology Show in London, England, to check out the state of this developing area. Part trade show and part conference, this was very much B2B territory with “I’ll give you a call next week” and “I’ll send through an NDA” being heard on more than one occasion. Although not a big show, covering only two halls at ExCeL, it incorporated IoT Connect and Augumented Reality VR. There was a strong international presence with exhibitors from Spain, Finland and China, and one person commented that he felt this was probably the #4 event after CES, IFA and MWC, which puts it in illustrious company. 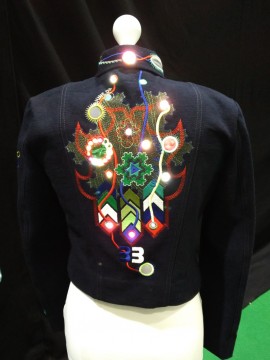 There was an interesting range of exhibitors from the big names like Samsung and TomTom to small entrepreneurs looking for help to take their products to the next level. Check out this embroidered jacket from Bonnie Binary with lights and controls sewn into the coat.

Jaguar were there showing off the F-PACE, a performance SUV stuffed with technology. Prices start from GB£35,000 but the First Edition model at the show was nearly twice that at £65,000. 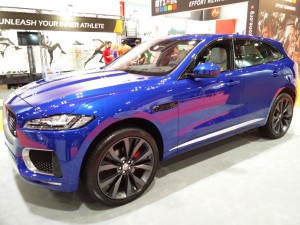 If you’re wondering how this ties in with wearables, the car comes with a waterproof “activity key” wristband that replaces a traditional key fob. The car can also detect when the driver is tired and suggests taking a break. Stunning looking car. 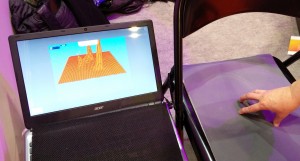 Smart fabrics were much in evidence too. With perhaps the longest track record in the industry, Infi-tex had a cloth that could do multipoint pressure sensing. See how the peaks correspond with the pressure from the fingers.

For the first time I left my trusty Olympus digital voice recorder behind and relied on my OnePlus 2 smartphone with IK Multimedia’s iRig Mic Cast and Sony’s Audio Recorder app for interviews. The iRig seems to cope with the background noise well and Audio Recorder records 44 kHz, 16 bit WAV files and I’m hoping that this will reduce the processing time for each interview. I bagged about 25 interviews and these will be pushed out over the coming weeks.