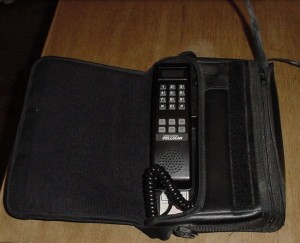 Since the mass adoption of the cell phone happened starting in the 1990’s, like everyone else I’ve gone through a long succession of cell phones. My very first cell phone was a Motorola bag phone. Remember those? Analog cell phones could sound surprisingly good. Of course, in fringe reception areas, the sound quality would often become quite crackly and was prone to dropped calls. Those bag phones could output up to three watts of power, so the reception could be decent depending on the area it was operating in.

The next phone I had was an early analog candy bar style phone with a nickel cadmium battery. It had a terrible standby time of only about 30 minutes. Reception was poor in part because output wattage was cut back to about ½ a watt.

After that, the next one was a more modern Nokia candy bar style phone with better battery life and was both digital and analog. Unfortunately, the digital sound in those days was pretty bad, and the analog reception suffered from vastly diminished ½ watt of power.

The next one was an updated version of the Nokia candy bar phone. It offered somewhat better performance, and a few more bells and whistles.

Cell phone number five was a folding LG camera phone that included a color LCD and was my first phone with an integrated 640 x 480 camera. The phone also had a USB port. I was able to figure out how to plug the phone into a computer and go through a very clunky process of transferring the photos from the phone’s built-in memory to the computer’s hard drive, a process that required some hacky third party software I downloaded from the Internet. Even after I replaced this phone I continued to use it for several years as an alarm clock, a function that worked quite well.

Next came my first smart phone. It was a Windows Mobile phone from HTC with a 3.5” pressure sensitive touchscreen with WiFi and 3G EVDO. It included a storable stylus and a slide-out keyboard, features I found of little practical use.

My second smartphone was another HTC phone running Windows Mobile, this time without the slide-out keyboard. It still had a 3.5” pressure-sensitive touchscreen, WiFi and 3G EVDO.

Smartphone number three was my first Android device, a Sprint Evo also manufactured by HTC. The HTC Evo  included a 4.3 inch capacitive touchscreen and the 8 megapixel rear camera was able to record 720p 30fps video, though the video sound quality suffered compared with newer devices. The HTC Evo’s biggest problem was that it had awful battery life.

Smartphone number four was a Samsung Galaxy S3. It had a 4.8 inch touchscreen and was a better performer than the Evo while offering somewhat better battery life.

Smartphone number five was a Samsung Galaxy Note 3. The Note 3 had a 5.7” 1080p touchscreen and offered great battery life. The Note 3 can record 4k video. The Note 3 has great stereo video sound. Many Note 3’s remain in use today.

The next, and my current smartphone is a Samsung Galaxy Note 4. I really like the Note 4. It has great battery life, fantastic performance and a Quad HD 5.7” touchscreen.

With cell phone number eleven, I find myself in a bit of a quandary regarding where do I go from the Note 4? Three of the Note 4 features I find extremely important, besides the 5.7” screen size, are the integrated Micro SD Card slot, the ability to do fast charging, and the user replaceable battery.

The fast charging feature is game-changing. If I have forgotten to plug the phone in or I find the battery is low, I can plug the phone in and quickly goose the battery. The Note 4 will charge from zero up to fifty percent in only thirty minutes which is incredibly handy. Even a quick 10 or 15 minute charge can be extremely useful in pushing the battery percentage back up to a higher level.

I recently experienced a suddenly failing battery in my Note 4. I was able to buy a high-quality replacement battery via Amazon and I’m back in business. If I had a phone such as the Note 5 with a non-user-replaceable battery, I would be forced to make an inconvenient trip to my phone provider.

I am inclined to simply keep the Note 4 that I have indefinitely. After all, it has everything that I demand. There’s nothing to be gained by switching to the Note 5 or later, and the user-replaceable battery to be lost.