Messaging is one of the killer apps for mobile devices and has followed the industry from first mobile phones through to the smartphones of today. It began with SMS, became notorious with Blackberry, integrated with social media and then became a battleground with law enforcement as end-to-end encryption kept conversations private.

Even with all these developments, SMS texting remains a popular choice as it simply works. Once you have someone’s mobile number, you can send them a text. There’s no need to check if they’re on WhatsApp, FB Messenger, Telegram, Signal, BBM…

I receive a handful of texts each day with the usual range of personal, work and spam messages. Some get deleted, some don’t, but by the end of the year, there’s probably over 1000 messages cluttering up the inbox. Texts don’t take up much space so there’s no imperative to have a clear out but eventually it has to be done.

Surprisingly, the standard Android SMS app Messages doesn’t have any management features at all and it’s not possible to delete messages in bulk. I want to be able to delete all messages more than two years old or, say, set a limit of 2000 messages. No can do, and it’s not a feature that I found in any other of the SMS clients that I downloaded.

To be clear SMS Cleaner isn’t a messaging app and all it does is find and delete old messages, but it does the one task pretty well. It has two modes, one called “Recommended” which deletes text messages older than a few months or weeks, and “Custom” which allows a more granular selection. With Custom, it’s possible to look for messages with keywords, specific contacts or in a chosen date range. 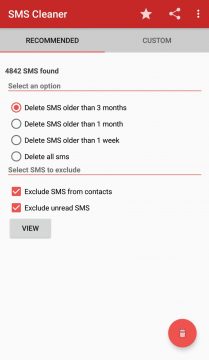 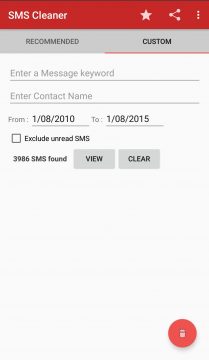 The “View” button shows the messages found by the search for double-checking before deletion. Once ready, deleting needs R-Bot to switch in as the default SMS app, which it politely requests, and then switches out when done. It’s a very well-behaved app. Adverts are displayed occasionally but there doesn’t seem to be a paid-for “pro”, which I would prefer. 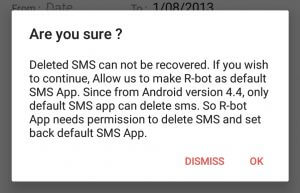 The only “bug” I found is that there is an option in “Recommended” to exclude texts from contacts, the idea being that it’s an easy way to get rid of spam messages which typically come from unknown numbers. Normally, it works well, but it did get confused by international dialling codes. If a number was prefixed by, say, +1, +44, +353, SMS Cleaner wasn’t able to recognise that as belonging to a known contact. Just watch out for that.

Overall, R-Bot SMS Cleaner is a handy app for keeping the SMS inbox under control. Try it out or if you’ve a better suggestion, let me know in the comments below.

As on-line marketers transfer their cold-calling attention away from land-lines to cell and mobile phones, their calls are becoming increasingly an annoyance when you are out-and-about. PrivacyStar offers a multilayered solution for Android and Blackberry to cut unwanted calls. Andy finds out more.

PrivacyStar is a smartphone app to block unwanted calls and SMS texts. At its simplest, user-specified phone numbers can be blocked to prevent calls or texts coming through and bothering you. The app also features SmartBlocking which blocks the top 25 numbers blocked by other users in the past week, so if there’s a major calling campaign on, those numbers pretty quickly get blocked.

Other features include CallerID lookup, where if the phone doesn’t know who is calling, the app consults with an on-line directory and displays the caller. For really persistent callers, complaints can be filed directly with the FTC.

The app is currently only available for Android and Blackberry, an iPhone version will be released before the summer. The app is free for a week and then $2.99 per month after that.

Cell service providers are beginning to notice a somewhat alarming trend among users. As plans graduate out of their contracts, more users are giving up extras like mobile web, texting, and SMS messaging. These “extras” can cost an extra $20-100 a month on most plans, and even more for family-type multiple-user plans like our family has.

As the economy worsens and people look for ways to cut costs, dumping a $40 data plan and a $30 texting plan can really impact a squeezed budget. Most users have alternatives for data, like laptops, netbooks, home computers, etc. The cost of the extras can outweigh their conveniences, in some cases.

Not that we techies don’t like our conveniences and our gadgets, of course. But when the choice is to pay your mortgage or pay for your extras on your cell phone, I think most of us know what the choice should be. In fact, when I hear of anyone buying a smart-phone these days, especially ones with expensive data plans like the iPhone, I have to wonder what they are thinking. I actually have a friend who works for the mortgage business and just bought an iPhone and locked herself into a 2-year contract that is twice as expensive as her cell phone plan had been before. What happens when her mortgage job goes south?

Scary stuff. I know we’ve cut back on things we don’t need that we can live without, including paring down our cell phone plans. And I have to wonder, if enough of us do that, will the cell phone companies, in order to maintain their business, start offering those extras at a lot lower price, as I know they can afford to do?