On review here is the Plantronics Calisto 620 UC wireless Bluetooth speakerphone. It’s designed to pair with a smartphone or tablet for impromptu teleconferences and as the UC (Unified Communications) variant, the Calisto comes with a pre-paired USB Bluetooth transceiver, working well with IP-based telephony such as Microsoft’s Lync or Skype for Business.

With the unboxing video out of the way, how well does the Calisto work in practice? It’s certainly very easy to use. Once paired with a smartphone, it can be treated as simple Bluetooth headset. The 620 doesn’t have voice dialling or voice commands, so calls have to be placed via the smartphone. I don’t see this as an issue given the expected usage of the Calisto 620 within an office environment. Incoming calls can be answered by pressing the call button on the unit.

Using the 620 with IP telephony was similarly easy. The pre-paired Bluetooth transceiver plugs into a spare USB port on the PC and the connection to the 620 is established automatically. For incoming calls, press the call button to take the call; for outbound calls, select the Calisto as the audio device in Lync and dial via the softphone.

The Calisto 620 supports A2DP meaning that music or video soundtrack can played through the speaker. Ok, it’s not hi-fi, but it’s a massive improvement on most smartphone speakers. The volume isn’t going to fill a lecture theatre but for a conference room or office, it’s perfectly adequate.

With regard to audio quality, it’s surprisingly good on both sides of the call. According to the Plantronics specification, the Calisto has “Bi-directional microphones (that) activate in the direction of speaker’s voice” and “Full duplex audio with 360° room coverage”. What that means is that 620 can pick out whoever is talking wherever they are in the room…

One of the biggest benefits is simply that the Calisto 620 is battery powered and can be located wherever is most convenient. Cabled (speaker)phones are still restricted to the length of the cord. Battery life is rated at seven hours talk time which I think is accurate as I got a working day of music out of the 620, with a few breaks here and there.

In summary, the Plantronics Calisto 620 wireless speakerphone is an ideal addition to the office arsenal of technology. Whether paired to a smartphone or IP telephony, the 620 provides portable voice-conferencing for small groups which can be up and running in seconds. At around GB£80, it’s competitively priced against its rivals, many of which don’t have the seamless integration with Microsoft Lync or other IP telephony systems.

Thanks to Plantronics for supplying the review Calisto 620 speakerphone. Feedback welcome from GNC readers on the unboxing video. 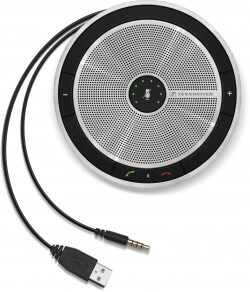 The Sennheiser Speakerphone Series features portable, stylish, speakerphones that can easily be used by business professionals who need to attend online conferences. It can also be used for personal communication. Each speakerphone comes with its own protective carrying pouch. Plug it into your computer and you are ready for a conference call.

The SP 10 and the SP 20 enable business professionals to easily make personal or small group conference calls. Each model features “plug in and talk” simplicity. The SP 10 connects to the PC/softphone. The SP 20 connects to the PC/softphone via a USB cable, or to a mobile phone or tablet via a 3.5 mm jack plug. The SP 20/20 version lets call participants connect via mobile phone and PC.

The interface on the speakerphones is intuitive. There are buttons that you can use to control the volume and to mute the mic. It gives you “hands free” control. When you aren’t on a conference call, the speakerphones can be used to play music. It’s not often that technology is so new that it’s only a few hours old but in this interview, Andy McCaskey chats to UrbanHello about their Kickstarter launch for their Home Phone.

The Home Phone is a DECT-based cordless speakerphone designed for family group conversations where everyone can take part. The 360 degree HD speaker produces great natural sound and not only is the Home Phone functional, it looks modern and stylish. The coloured part at the bottom of the phone comes in a range of interchangeable colours to either match or contrast the interior decor.

Don’t take my word for it, the Home Phone took Design and Engineering Honors at CES 2013 and it’s 27% funded with about ten days to go.

Interview by Andy McCaskey of SDR News for the TechPodcast Network.