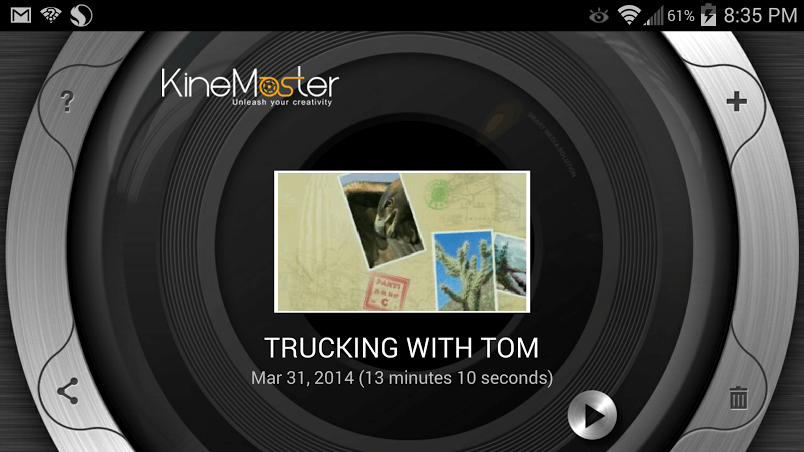 For several years I have had feet planted firmly in the two dominant mobile device camps — Android and iOS. I have a 64 gigabyte iPad Air, but I also have an original Nexus 7 as well as my third Android phone, a Galaxy Note 3. The Galaxy Note 3 is an incredible piece of hardware. It has an awesome 1080p 5.7″ display, excellent battery life, and a 2.3 gigahertz quad core processor. The Galaxy Note 3 is the most powerful computing device I have ever owned, including more powerful than every Apple or Windows computer I currently have.

In the past iOS has had a distinct advantage in the form of more sophisticated apps. However, that is rapidly changing.

I usually end up finding ways of pushing my hardware to its limits. I used to do video the conventional way by recording it on a separate device such as a Sony HD camcorder. I would have to go through the arduous task of capturing it to the computer, editing it in a video editor, rendering the file out and finally uploading it to a service such as YouTube.

Now with the Galaxy Note 3 I have a device that is capable of recording excellent video, but it also has a touchscreen that is large enough to edit on.

Up until recently, there were no good Android video editing apps available.

That has all changed with the release of an Android video editing app called KineMaster Pro. There is a free watermarked version which I tried out initially. I quickly determined that KineMaster Pro was worth the $2.99 price tag so I bought it. KineMaster Pro offers themes, along with the ability to easily add background music. It also offers different variable-length scene transitions. It’s possible to export the final rendered result in 1080p, 720p or 360p. It gives a very accurate countdown timer once the rendering process is started. On the Galaxy Note 3, a 13.5 minute long video will render to 720p resolution in about 8 minutes to a 621 megabyte file.

The seller is adding in extra themes that can be applied from within the app.

At one time, even a short video represented several hours’ worth of work to go from initial recording to the final rendered file. If the process can be fully handled on one device, video production actually becomes quick, painless and fun.

Squarespace the web publishing and content management system, recently released a note app for the iPhone. Not surprisingly to anyone who is a fan of Squarespace it is beautiful and simple to use. When you open it up you are presented with a blank page. If you want to get back to a previous note you swipe to the right. Once you are finished writing a note and are ready to send it you swipe to the left and are given a list of choices. Not surprisingly you can send it to your Squarespace blog, but you can also send it to Dropbox, Facebook, Twitter, Evernote or by email. If you want you can choose to make one of them your default choice. When you swipe up to send the note it will then send it to your default choice. If you don’t make a default choice then when you are ready to send a note you have to swipe to the left make your choice, swipe back and then up. Although Note by Square Space is beautiful, I ran into several problems trying to use it. The first was once a note was sent I couldn’t edit it on the Note platform. The only thing I could do was make a copy of the note and treat it as a new note. Although this does make some sense, I just wish I had the option. The biggest problem I had with Note was sending by swiping up didn’t always work or it would work but would not indicate it was working. This can be very frustrating as a user. I still like Note by Squarespace for it’s simplicity, but it is not perfect. It is available for free for the iPhone