The Optoma ML1500 DLP Projector is a stylish ultra mobile LED projector which pretty much does it all in a very neat little package with a good complement of ports, connections and fun tricks. Let’s take a look. 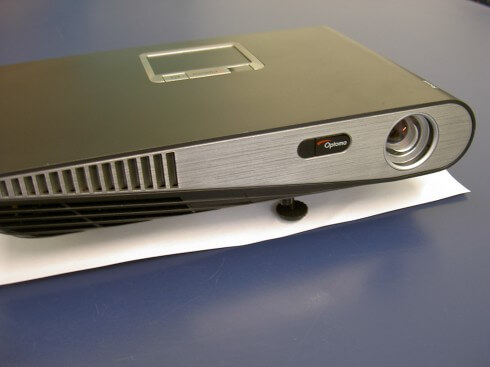 Measuring just 27 x 17 x 4.5 cm and weighing only 1.4 kg, the ML1500 is very portable and comes with a neoprene carrying case. As you’ll see from the photos, the projector is attractively styled, with the ports on the back and a touchpad on the top. The touchpad can be used to operate the built-in menus to control the ML1500 and there is also a supplied remote control for when changes need to be made from afar. On the bottom, a third leg can be screwed in and out to adjust the angle, and a standard photo mount allows the projector to be hung from above. Finally, a lever on the side controls the focus. 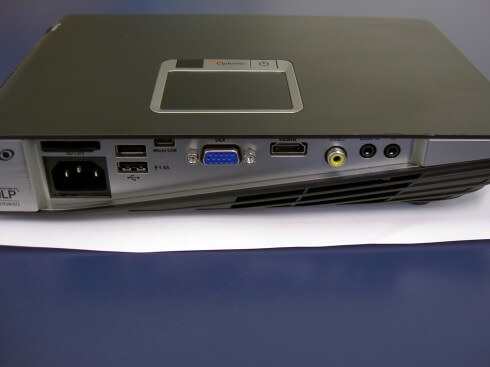 Round the back there is a plethora of connections, with composite video, HDMI and VGA connectors, 3.5mm jacks for audio and microUSB, USB and SD card slots. Connect up the ML1500 to a PC or laptop and it appears as an Optoma WXGA (1280×800) monitor and with suitable OS, you can do the usual tricks of either reproducing the current desktop or extending the desktop to the ML1500’s display. Locking onto the VGA signal took a second or two, but nothing out of the ordinary. The small size of the projector meant that I could keep it on my desk and if I needed to have an impromptu team meeting that needed something shown, I could quickly turn the ML1500 onto a nearby wall, rather than everyone huddle round a monitor. 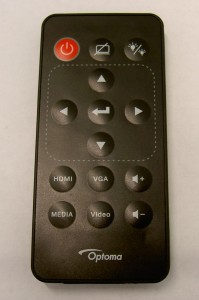 On the fun side, the ML1500 makes a good partner to mini media streamers like the Roku Streaming Stick or Chromecast. The stick can be plugged into the ML1500’s HDMI sockets and power pulled from an adjacent USB socket. All set and good to watch Netflix or other streaming service with minimum of fuss.

The ML1500 does a few other tricks up its sleeve (or USB port as the case may be). First of all, the projector has a built-in media player and office document viewer that will show films, play music and display Word, Excel, Powerpoint and PDF files directly from either an SD card or USB memory stick. I didn’t deliberately try to break the viewer but the ML1500 managed to cope with all the Office documents that I threw at it. It’s relatively easy to navigate round the documents and zoom in or out with the remote control. The on-screen menus are easy to navigate with large friendly icons showing the way.

Playing movies is cool too, with the ML1500 handling mp4, avi and mov format files (though I didn’t confirm the codecs inside each). The presentation is good with the projector keeping up with the action and the picture is fine in unlit room – it doesn’t need to be darkened. Obviously you can have a pretty big screen if you want – I watched a couple of films and really got into the cinematic feel of things. Colours were good and sound is ok – it’s not hifi but you can connect up via a 3.5 mm jack if you want more oomph.

Next on the list of clever things is the USB wifi dongle which plugs into the ML1500. Once connected to the “Optoma Display” wireless network, you can use an app on your smartphone or tablet to play presentations and display media. I used WiFi-Doc on Android and the app is available for iPhone and iPad too. It’s easy to use – select what you want to show and it’ll be shown by the ML1500. You can zoom in and out of photos and documents, and about a second later, the projector will update to show the change. Here’s the app showing a photo of the house that Mel Gibson used while filming Braveheart. The app wasn’t quite as good as the built-in player when it came showing office files as a couple of pdfs had missing images. 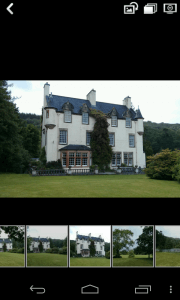 A final nifty feature was auto-keystone correction, where the ML1500 automatically adjusts the projection to account for the angle of the projector, which means that the picture on the screen is always rectangular and not fatter at the top than the bottom.

One minor niggle is that adjusting the focus has to be done manually and it can’t be corrected using the remote control. Not a big deal in most circumstances but could be an issue if the projector was mounted high up.

Although I’m not a projector expert, I enjoyed putting the ML1500 through its paces. Its comprehensive ports and built-in media player make it a good choice for both business and pleasure, and for those on the move, the low weight and PC-free capabilities, are attractive. I think it’s priced about right too at under £700.

Thanks to Optoma for the review unit.