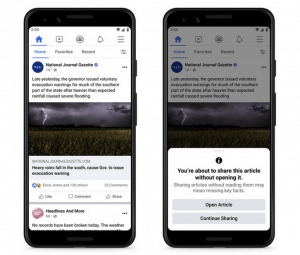 Today, Facebook tweeted about something that could be a new feature on the platform. Facebook will be testing a prompt that was originally released by Twitter in September of 2020. The prompt will encourage Facebook users to actually read an article before posting a comment about it.

Starting today, we’re testing a way to promote more informed sharing of news articles. If you go to share a news article link you haven’t opened, we’ll show a prompt encouraging you to open it and read it before sharing it with others.

The Verge reported that those who are shown this pop-up can choose to continue sharing it without having opened that article if they want to. To me, it sounds like giving users the option of sharing an unread article and/or commenting on it defeats the entire purpose of the prompt.

A Facebook spokesperson told The Verge that the test of this prompt would be rolled out to 6 percent of Android users worldwide. I suppose that the way the prompt is used – or ignored – might determine whether or not Facebook eventually rolls it out to everyone.

There are some flaws with these type of prompts. It appears that the prompt will require a person to actually open the article through Facebook before they can share it. That doesn’t necessarily mean the person is going to read the article. A person who wants to share an article from a less-than-credible website will be permitted to do so.

Based on the article from The Verge, it appears that the primary reason Facebook is testing this prompt is to combat the spread of misinformation. That is a noble goal – but it won’t work if people choose to share articles from tabloids and other questionable sources.