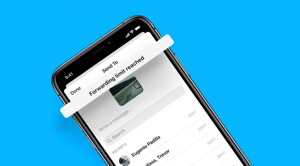 Facebook announced that they are introducing a forwarding limit on Facebook Messenger. From now on, messages can only be forwarded to five people or groups at a time. The purpose of this limitation, according to Facebook, is slow the spread of viral misinformation and harmful content that has the potential to cause real world harm.

We want Messenger to be a safe and trustworthy platform to connect with friends and family. Earlier this year, we introduced features like safety notifications, two-factor authentication, and easier ways to block and report unwanted messages. This new feature provides yet another layer of protection by limiting the spread of viral misinformation or harmful content, and we believe it will help keep people safer online.

Personally, I think it is smart for Facebook to limit the reach of misinformation on Messenger with a forwarding limit of five people or groups at a time. Nobody wants to get questionable messages from strangers who clearly have an agenda they want to push. The forwarding limit should slow down those who want to spend their free time spreading misinformation. Perhaps they will give up.