Xiaomi have certainly been busy in the past few weeks, releasing updated versions across its product line – Redmi, Mi and now Poco, with the release of the F2 Pro. It’s a replacement for the Pocophone F1 and is now just branded Poco, which is a definite improvement over something that sounds like Pokemon. Having said that, this is not a brand new phone as the F2 is a variant of the Redmi K30 Pro. Whatever the label, this is is Xiaomi’s “flagship killer” and on paper, it’s definitely a worthy contender in the not-ridiculously-expensive-but-well-specced section. Let’s work round the details.

Looking at the phone, there’s a 6.67″ 2400 x 1080 FHD+ AMOLED “Ultimate Full Screen Display”. Unlike many high-end phones, this screen seems to be flat without a curved edge which might be seen as a good thing by some people. It’s an HDR10+ screen with a contrast ratio of 5 million to 1 and there’s an in-screen fingerprint sensor behind the Gorilla Glass. Physically the phone is 163.3 mm x 75.4 mm x 8.9 mm and weighs in at 218 g. It comes four colours – Cyber Grey, Electric Purple, Phantom White, Neon Blue. 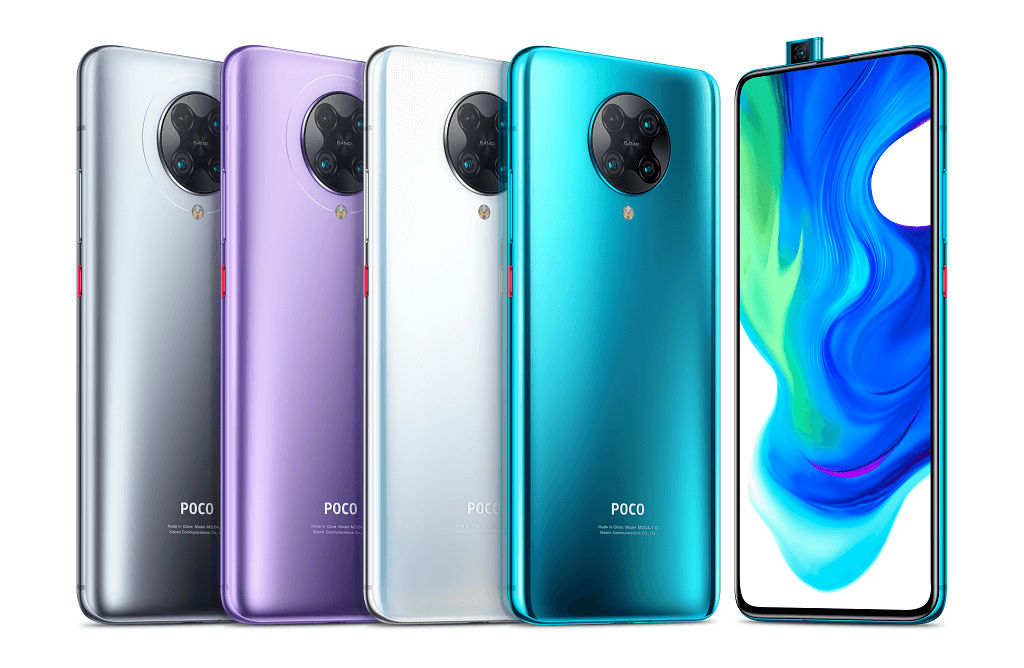 Round the back, there are four cameras arranged on a disk. The main shooter is a 64 MP camera with a Sony IMX686 sensor. Second, there’s a 13 MP ultra wide-angle camera with a 123° field of view. Next is a 5 MP telemacro camera that can focus down to just a few centimetres and finally there’s a 2 MP depth sensor camera for when you want some bokeh. Round the front, there’s a selfie camera which pops up from the top of the phone. It’s a 20 MP sensor.

Inside there’s a Qualcomm Snapdragon 865 with a Kryo 585 CPU and an Adreno 650 GPU plus support for 5G and WiFi 6. At this point, it’s worth mentioning that there are two versions of the F2 available, one with 6 GB RAM and 128 GB storage and another with 8 GB and 256 GB. Oddly, the 6 GB version is LPDDR4X, whereas the 8 GB one is LPDDR5. There are dual SIMs but only one can be 5G (as I understand the specs).

Other features include an IR blaster (kind of a Xiaomi feature) and fan-favourite, a 3.5 mm headphone jack.

Price-wise the Poco F2 Pro comes in at €499/$499 for the 6GB/128GB version and €599/$599 for the 8GB/256GB storage version. The phone will be available in regions as the summer progresses but if you can’t wait, the phone is already available from GearBest.