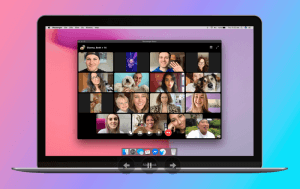 Facebook is rolling out Messenger Rooms. They also are expanding WhatsApp group calls, and adding new live video features for Facebook, Instagram, and Portal. Perhaps Facebook is trying to compete with Zoom, which has grown to 300 million users.

Messenger Rooms make it easy to spend quality time with friends, loved ones, and people who share your interests. Create a room right from Messenger or Facebook, and invite anyone to join your video call, even if they don’t have a Facebook account. Rooms will soon hold up to 50 people with no time limit.

Facebook states that when you create a room, you choose who can see and join it. You can remove people from the call and lock a room if you don’t want anyone else to enter. Messenger Rooms is rolling out to some countries this week and will expand to the rest in coming weeks.

The Verge points out that room calls are not end-to-end encrypted, but Facebook says it does not view or listen to calls.

Facebook is expanding WhatsApp group calls to enable group voice and video calls with up to eight people. Facebook reminds users that as before, WhatsApp calls are secured with end-to-end encryption so no one else can view or listen to your private conversation, not even WhatsApp. It seems to me that the smarter, safer, thing to do would be to use WhatsApp instead of Messenger Rooms.

On Instagram, you can now watch and comment on live videos from your desktop. And you can save your videos to IGTV, which Facebook has been pushing. Doing so will allow your video to stick around longer than the 24-hour time limit in Stories.

Soon, users will be able to go live on Portal to Facebook Pages and Groups. The Facebook Live Portal app already lets users broadcast to their own profile. Later this month, Facebook will make it possible for Portal users to share their broadcasts with their communities.

I’m not comfortable with Facebook, especially considering all the data it grabs from users. People who do not have a Facebook account, and who enter a Messenger Room, may be unaware that Facebook may start collecting data from them. A few years ago, Portal was actually spying on people, which should make people very hesitant to use it.