The new OnePlus 8 series will launch tomorrow but there have been so many leaks, both official and unofficial, that it makes you wonder what they have left to announce. Here’s what’s been revealed over the past week or so…

There will be a new “fluid display” with a 120 Hz refresh rate which has received an A+ rating from DisplayMate and the Best Smartphone Display Award. According to DisplayMate’s analysis, the OnePlus 8 series display sets or matches more than ten smartphone display performance records in nearly all key categories for the best displays on the market, including colour accuracy, image contrast, display brightness and screen reflection, with four categories scoring visually indistinguishable from perfect. The full details of the award are under embargo but check here after the keynote.

“OnePlus has quickly established itself as an industry leader in display performance, consistently providing among the best implementations of OLED technology on the market,” said Dr. Raymond Soneira, President of DisplayMate Technologies. “The OnePlus 8 series continues that tradition of excellence, improving on the outstanding results of last year’s OnePlus 7 series and keeping OnePlus ahead of the curve.”

In other screen news, OnePlus has announced that the 120 Hz fluid display will feature technologies like motion estimate and motion compensation (MEMC) to smooth video playback and 10-bit colour for a more accurate display of colours across the spectrum.

OnePlus teased the new design with a short YouTube video revealing a new Glacial Green finish. Don’t know if this the 8 or the 8 Pro…

OnePLus has talked a little about CMF – colour, material, finish – which embodies how a smart phone (or any product) feels in the hand. Pete Lau, CEO, talks about this and the impact of some of the materials over in the OnePlus community forums.

The Qualcomm Snapdragon 865 will power the OnePlus 8 series, giving significant improvements in both CPU and GPU performance (25%) while being more energy-efficient (also 25%). In addition, video recording processing is much improved with a similar reduction in power consumption.

The newest generation of smartphone RAM, LPDDR5, will be used too, with high-speed data transfer rates of 6,400 Mb/s. Woo-hoo. With a focus on improving battery life, LPDDR5 has 45% less power consumption compared with LPDDR4.

OnePlus already usings UFS 3.0 flash storage but two new technologies have been added to the hardware story – Turbo Write and Host Performance Booster. Turbo Write uses the upper section of the ROM’s storage as a high-speed read/write interval. In theory, each read/write will enter this high-speed buffer, and then proceed to the next command of data transfer. I guess what this means is that there is a fast cache that data can be shuffled into before being written into the main storage area.
In addition, HPB (Host Performance Booster) can further improve the random read performance after extended use.

All the OnePlus 8 series phones will be 5G.

The new OnePlus 8 Pro will feature wireless charging using Warp Charge 30 Wireless, giving a 50% charge in just 30 minutes. OnePlus has been one of longest holdouts on the wireless charging front (Palm had it on the Pre in 2009…) so it was inevitable that to keep a credible flagship phone, it needed wireless charging. The technology has a power input of 30W, hence the 30 in Warp Charge 30. If a OnePlus charger isn’t available, the 8 Pro can be charger from any Qi wireless charger, albeit at a slower rate. Both 5W and 10W charging speeds are supported with Qi.

Going by the diagrams, there will be Warp Charge Wireless dock but as yet, no photos and no price. 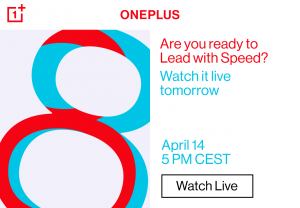 With everyone staying at home to keep Covid-19 at bay, the usual city pop-ups for the early adopters would illegal in most countries round the world. Previously, these events have been hosted in cities like Paris, Helsinki, London, Berlin, Amsterdam, Copenhagen, Stockholm, Rome, Milan, Madrid, Barcelona and Brussels. As expected these days, the event is going on-line and anyone buying a OnePlus 8 device from the official website shortly after the launch keynote will get a special pop-up box that includes their new devices plus some OnePlus branded goodies. Limited quantities and first-come-first-served, just like the real world pop-ups.

I’ll be bringing you the details of the new phones after the keynote launch…..whatever they are!