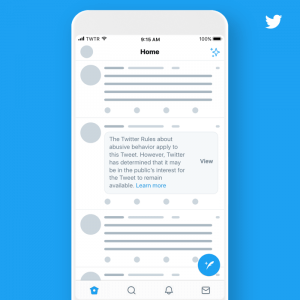 Twitter has finally come up with a plan to deal with the tweets of government officials and political figures who post content that breaks Twitter’s rules. It involves a new notice attached to the tweet that will provide additional clarity. Twitter will not remove those tweets, or suspend the account (in most cases).

Serving the public conversation includes providing the ability for anyone to talk about what matters to them; this can be especially important when engaging with government officials and political figures. By nature of their positions, these leaders have outsized influence and sometimes say things that could be considered controversial or invite debate and discussion. A critical function of our service is providing a place where people can openly and publicly respond to their leaders and hold them accountable.

The new notice will apply to tweets from the following criteria:

Twitter points out there are cases, such as direct threats of violence or calls to commit violence against an individual, that are unlikely to be considered in the public interest. The implication is that Twitter might actually remove those kinds of tweets, or perhaps suspend the account.

Here is what Twitter’s Trust and Safety, Legal, Public Policy, and regional teams will consider before adding the new notice to a tweet:

When a tweet has a notice placed on it, it will feature less prominently on Twitter. It will not longer appear in: Safe search, Timeline when switched to Top Tweets, Live event pages, Recommend Tweet push notifications, Notifications tab, or Explore.

It is worth noting that the new notice will not be applied to any tweets that were posted before today.

Personally, I am interested in seeing how the new notice will be used. I expect that some Twitter users will feel like the notice doesn’t go far enough towards cleaning up Twitter, while others will complain that the new notice is “shadow banning” or “censorship”.