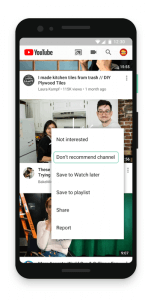 YouTube posted information today about ways they are giving users more control over their Homepage and Up Next videos. This appears to be done in response to users telling YouTube that they wanted more control over what they see.

Connecting our users with the content they love is important to us. We want to help viewers find new interests and passions – such as a new favorite artist, a new creator they can follow or simply the best food recipes. But there’s one true expert in what you want to watch: you. One thing we’ve consistently heard from you is that you want more control over what videos appear on your homepage and in Up Next suggestions. So we’re doing more to put you in the driver’s seat.

YouTube mentions three specific changes they are rolling out in the coming days.

Remove suggestions from channels you don’t want to watch: YouTube has made it simple for you to tell them to stop suggesting videos from a particular channel. Just tap a three-dot menu next to a video on the Homepage or Up Next, then “Don’t recommend channel.” After that, you should no longer see videos from that channel suggested to you on YouTube. This feature is available globally on the YouTube app for Android and iOS and will be available on desktop soon.

Learn more about why a video may be suggested to you: YouTube will post information underneath a video suggested to you in a small box. It provides an explanation about why YouTube selected that video for you. This feature is now available globally on the YouTube app for iOS and will be available on Android and desktop soon.

Personally, I think this is a step in the right direction. Giving users more control over the videos that are suggested to them will likely make people more interested in using YouTube. Parents whose children no longer watch YouTube Kids might be able to use these new tools as a filter on YouTube.