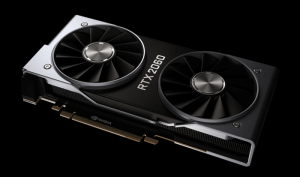 NVIDIA unveiled the GeForce RTX 2060 at CES 2019. On January 15, 2019, the $349 GeForce RTX will deliver advanced ray tracing and AI features, plus levels of performance previously available only in high-end gaming GPUs, at a price point within reach of PC gamers worldwide.

“For tens of millions go gamers everywhere, next-gen gaming starts today,” said NVIDIA founder and CEP Jensen Huang, at the RTX 2060’s unveiling at CES 2019. “Desktop gamers are demanding, and the RTX 2060 sets a new standard – an unbeatable price, extraordinary performance and real-time ray tracing that blurs the distinction between movies and games. This is a great moment for gamers and our industry.”

Furthermore, users can significantly boost their GPU performance with manual overclocking (NIVIDIA reached up to 2 GHz in their labs) or use NVIDIA’s one-click OC Scanner technology in custom tools such as EVGA Precision XOC and MSI Afterburner to get rock-solid overclocks.

The GeForce 2060 will be available beginning January 15, 2019, in systems built by Acer, Dell, HP and Lenovo, as well as by leading system builders worldwide.

A stock-clocked RTX 2060 Founders Edition board – designed and built by NVIDIA – will also be available on that date, exclusive from the NVIDIA website.