Amazon might be planning a plethora of Alex-enabled devices over the coming months (according to CNBC and covered by Todd), but Optoma’s voice control into their HD projectors right now. Here’s the Alexa-supported 4K Ultra HD projector, UHD51A. 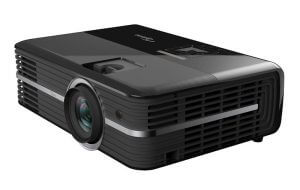 To get the boring out the way, the UHD51A is a very capable ultra HD DLP (digital light processing) projector with a resolution of 3840×2160, pushing out 2400 lumens, with High Dynamic Range (HDR) compatibility, two HDMI ports and HDCP 2.2 support. A 3000 lumens version is available in the US but not the UK.

The exciting bit is that the UHD51A can be controlled by Alexa with a range voice commands to manage both the projector itself and media playback.Here are some examples.

For the built-in USB media player

To be clear, the projector doesn’t have Alexa built-in and you do need an Echo or Dot to work alongside the projector, but it’s still pretty cool.