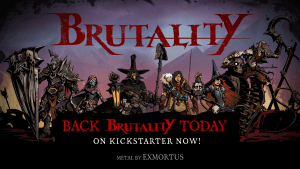 Brutality is a PVP (player vs player) medieval combat brawler board game. It is designed for 2 to 4 players. The Brutality Kickstarter has 19 days to go (at the time I am writing this post). Its goal was $42,000, and it currently has $69,969. It was funded in 29 hours.

Brutality comes with 8 figures, 8 Hero Cards, 56 Relic Cards, 10 Artifact Cards, more than 60 Hazard Tiles, and a Game Board. It appears that some of the Kickstarter stretch goals have been reached, and this could result in additional Heroes being added to the game box.

To win, your team must destroy the other team using brutal attacks, relics, artifacts, and environmental hazards. Each team selects 2 Heroes, each with their own special attacks and moves.

Relic cards change up the game in ways that can be beneficial for you, or harmful to your enemies. Artifact cards have powerful effects with cooldowns. The Environmental Hazards can be used like traps or weapons against the other team’s Heroes.