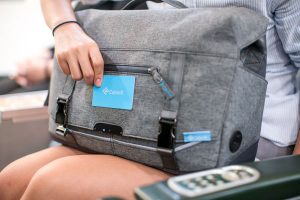 CabinR is the world’s first in-flight security alarm system that secures your belongings while you sleep during flights. CabinR has integrated their patent pending technology into two travel bags: a backpack and a messenger bag.

CabinR’s unique security device deters a would-be thief who tries to open bags stored in overhead compartments and under seats while their owners sleep or are otherwise distracted.

CabinR’s bags include a detachable security blanket designed with multiple circuit boards that connect to highly sensitive motion sensors. After the user arms the security system by simply placing a unique RFID key card on top of the device, the bag will emit a loud alarm if the sensors detect theft activity. Normal movement won’t trigger the alarm, but abnormal orientations or tampering will.

Never worry about your bags again with CabinR’s Discover Travel Backpack and Vista Messenger Bag. Whether on an airplane or exploring a busy market, CabinR’s first-of-its-kind anti-theft sensors will keep your belongings safe from prying hands.

The RFID technology does not conflict with in-flight communications devices – and the sensors are designed to distinguish between user activity or turbulence and an attempted robbery.

When the alarm is triggered, a buzzer will generate a loud siren (95dB) until it’s deactivated by using the unique RFID key card or entering in a user-defined combination code. The alarm itself cannot be easily compromised, as the siren is too loud to be muffled and the buzzer location is hidden from sight – there is no “OFF” button for would-be thieves to locate.