Bungie made a decision to remove the graphical element (or, artwork) from a piece of armor in Destiny 2. To be more specific, the decision focuses on the Road Complex AA1 gauntlets. The artwork was removed after Bungie became aware what the imagery resembled.

2/2 Our deepest apologies. This does NOT represent our values, and we are working quickly to correct this. We renounce hate in all forms.

I’ve gone down an internet “rabbit hole” (so you don’t have to) in regards to the imagery on the gauntlets. I’m going to summarize the details here, and leave you to dig deeper if you want to know more background.  It helps if you know what the Road Complex AA1 gauntlets looked like: 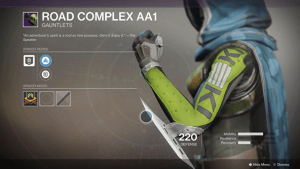 It has been said that imagery looks like “kek”. World of Warcraft players might identify “kek” as “lol”.World of Warcraft has two factions: Horde and Alliance. If I play my Orc (Horde) and put “lol” into the chat – Alliance players will see “kek”. Blizzard intentionally prevents Horde and Alliance players from being able to verbally communicate with each other in-game.

The Know Your Meme website has details about how “kek” was taken up by people who use 4Chan. It appears they created a satirical religion around it. The Southern Poverty Law Center has a detailed article about “kek”. The key thing to note is that the artwork on the Road Complex AA1 gauntlets resembles the lettering on a flag that has been seen at some alt-right rallies.

Bungie made a blog post titled “Too Close for Comfort”. They provide more information than one can fit into a Tweet about their decision regarding the Road Complex AA1 gauntlets.

Earlier this week, we were made aware that a graphical element on one of Destiny 2’s armor pieces bore close resemblance to an internet meme that has been subsequently repurposed to represent hate and intolerance. This was completely unintentional. As an immediate response, we extended our planned maintenance window to remove the element from the armor piece itself, and will be following up next week with another patch to remove the same element from the UI icon and preview screens, scrubbing it from the game altogether.

The Bungie blog post has information about how that image got into the game, and what steps they are taking to prevent something like this from happening again.