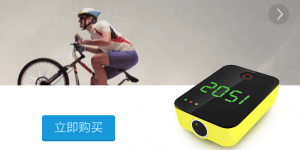 The ability to capture video used to be a very special thing for mere mortals to do. Videographers-to-be had to shell out hundreds (if not thousands) of dollars for bulky camcorder systems that could barely be considered portable. And while those devices might’ve been great, they still had many limitations. But those days are long gone. Almost everyone is carrying at least one device on them at all times capable of recording (and even live streaming) HD quality video. This ability to easily capture video has crept into all areas of our lives. Capable video cameras are now so abundant that they’re made for everything from dashboards to surfboards. MiniWing is now bringing this idea to bicycles with its new Camile Bike Cam.

The Camile Bike Cam can be used to record either video or burst-mode still photos. Users can point the lens outward or in whatever direction they’d like to record. Once turned on, an LED screen can display the speed of travel, local time, or the ongoing mileage of a bike trip. Three indicator lights keep track of battery life, video recording status, and if the device is connected via Wi-Fi or Bluetooth to a smmartphone. Once footage has been shot, an application is available to sync footage to a connected device, and can also be downloaded to a computer with a USB cord.

The Camile Bike Camera is currently on display at MiniWing’s booth at the South Hall, Level 2, booth # 25234 during CES 2016.