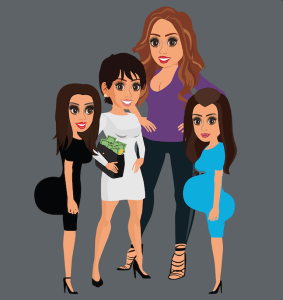 There’s been a ton of news that came out of E3, especially from the bigger, well known, companies. So, you might have missed hearing about a fun mobile game that was created by a small company called 3 Queens. It is an all-woman owned gaming development and publishing company that is based in South Carolina.

The first mobile game from 3 Queens is called Creeping with the Crudashians. It is intended to be a parody of “America’s reality TV royal family” – the Kardashians (and their show, “Keeping Up with the Kardashians”. ) The game is also a critique of celebrity vanity in general.

Creeping with the Crudashians is a Match 3 game that is available for both iOS and Android users. Give 3 Queens your email, and get on their list, if you want to know exactly when the game launches. I’ve subscribed, in part because I like to support women who are in the gaming industry, and also because I’m so very tired of all the “news” about whatever the Kardashians are doing. I think I’m really going to enjoy this game!

The game includes characters that resemble the Kardashians. There’s Cym, Crusty, Crassy, Crawly, Crewelina, and more. The concept of the game is to poke fun at the major milestones and events of the Crudashians based on their career timeline. To win a level, players must match tiles to increase their fame, break sex tapes, etc., with an overall goal to gain the ever elusive talent.

The in-game currencies are Fame, and Talent. The game does allow for micro-transactions. You can purchase Fame, but you can’t buy Talent. Fame, however, is abundant in the game and the default reward for anything a player does. The official public launch of Creeping with the Crudashians is this July. It will be available on both the iTunes and Play! stores.

Previous to creating this game, the 3 Queens (Cara Florence, Nicole Young, and Maureen Coffey-Edri) created an app called WeConsent2 It is an affirmative consent application “designed to protect you and your partner before passion”.