The official Google Cloud Platform Twitter account posted a rather confusing tweet that included a controversial hashtag today. It’s unclear exactly what message they were intending to send with that particular tweet, but it definitely got a lot of attention. This situation is a good example of why brands should take the time to understand a hashtag before including it in a tweet.

The tweet has since been deleted from Twitter but is (at the time I am writing this article) viewable on Archive.today. The image in the tweet shows a video game controller being held by two hands, both of which are “Simpson’s yellow”. One hand has painted nails and a bracelet, the other does not. 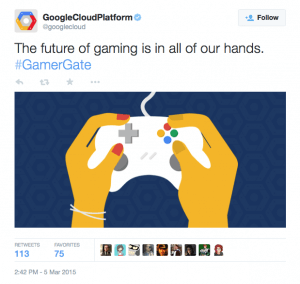 The tweet includes the #GamerGate. TIME has an article that offers a good explanation of what GamerGate is, how it got started, and the kinds of things people who identify themselves as in support of GamerGate have done.

It appears that whomever posted the tweet with the #GamerGate on the official Google Cloud Platform Twitter account may have been unaware of what GamerGate is or the controversy that surrounds it. Someone at Google didn’t take the time to Google GamerGate before including it in a tweet.

The tweet was deleted and a new tweet appeared with what seems to be an apology. The new tweet calls the previous tweet “a mistake”. It also clarifies that “We do not support #GamerGate.” 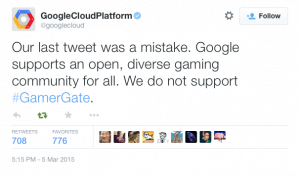 This situation is one that brands, and individuals, can learn from. Don’t include a hashtag in your tweet unless you have taken the time to research what that hashtag is about. Google it. Read some articles. At the very least, see who else is using that hashtag and what they are saying. Doing so can prevent you from making the mistake that someone behind the Google Cloud Platform Twitter account made today.