TP-Link have been releasing steadily HomePlug Powerline products based on the AV600 standard which offers increased capacity for multiple HD streams. TP-Link have kindly sent through some of their new AV600 Powerline gear for a bit of hands-on testing. Regular readers will recall that I’d previously looked at the WiFi Powerline Extender back in December so it will be interesting to compare the faster gear. Let’s take a look. 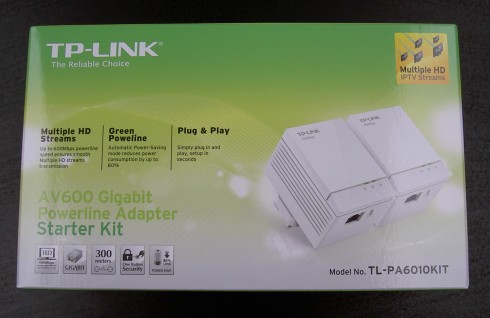 First, for those who aren’t familiar with HomePlug Powerline, it’s a technology that uses the mains electricity circuits to transmit network signals and as most homes have power sockets in every room, it’s ideal for spreading the network round the house. This AV600 Gigabit Powerline Adaptor Starter Kit (TL-PA6010KIT) has two adaptors, one of which usually connects up to the broadband router or data switch and the other goes into the otherwise network-free room. The box also has two ethernet cables, software CD and a Getting Started guide. 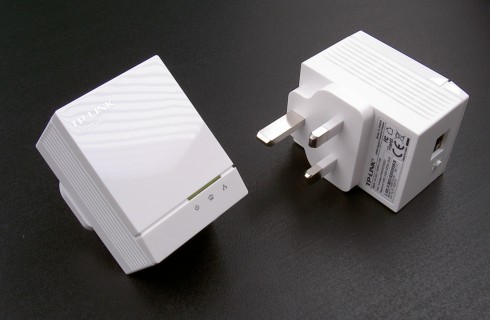 As you’ll see from the plugs, these are UK spec units but variants for other countries will be available. The cases are plastic but the seem well-built enough and should resist the normal bumps and knocks that can be encountered round the home. A couple of LEDs indicate the status of the network and transfer activity.

As the adaptors come pre-paired, no configuration is required and getting started is simply a case of plugging them in and attaching network cables. If the adaptors are to be introduced into an existing HomePlug network, there is a small pairing button on the bottom of each unit. Alternatively, a bundled software application can be used to manage the network and add additional adaptors.

These newer 300 and 600 Mbps adaptors use techniques borrowed from wi-fi standards to increase the throughput and to cope with noise and errors but the real-world data transfer rate will never be anywhere close to the rated speed. The overhead of encryption takes its toll on the transfer rate too, but as with wireless it’s very much a necessity to keep data away from prying eyes.

The adaptors in this starter kit come with a single gigabit ethernet port which can either connect to one device or connect into a switch or hub to share the connection. Alternatively, TP-Link have a newer 3 port AV600 version (TL-PA6030) which will keep the back of the entertainment unit a little bit tidier where there’s a smart TV, a game console and a media streamer.

Performance-wise, I did some testing using Totusoft‘s Lan Speed Test. Bear in mind that no two homes will be configured the same, so while the Mbit/s figures are of interest, it’s the relative performance that matters. With that in mind, I tested the data transfer speeds between a Buffalo NAS and a Toshiba laptop using 10 GB files.

These figures tell us two things. First, there’s a measurable performance boost between the older AV500 and the newer AV600 of around 25%. Second, there’s capacity for multiple HD data streams. A 1080p mp4 video stream needs somewhere around 22 Mb/s so at a true 91 Mb/s transfer rate, there’s plenty of capacity for several HD streams. For comparison, a Blu-ray video can output up to 48 Mb/s.

(Again for those people who get all concerned as to why I didn’t get speed “X” Mb/s, it’s the wiring in the building, combined with the features or restrictions of my laptop, data switch and NAS.)

The network management software on the enclosed CD didn’t like my Windows 8.1 and refused to install but an updated version was available from TP-Link’s website. The software lets you monitor the actual speed of the network, add additional adaptors, carry out firmware upgrades and set basic QoS. Some of it was beyond me too! 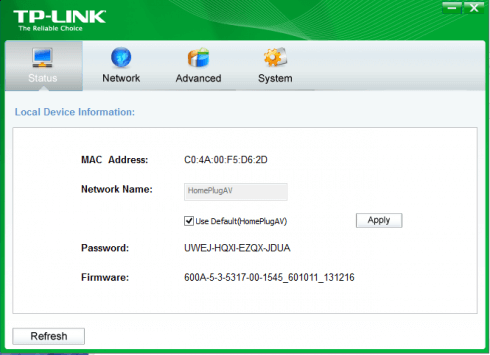 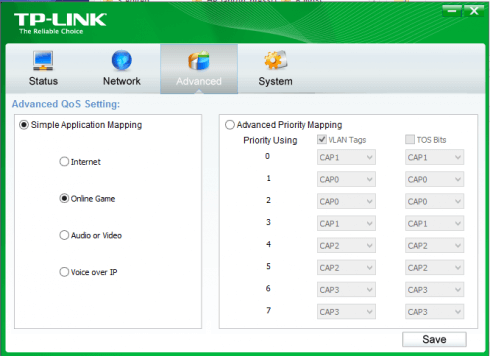 The software is nowhere near as good as Devolo’s Cockpit but it does the job most of the time. On a few occasions I found that the app wouldn’t start properly, putting an icon into the System Tray but failing to display a window: usually a reboot resolved the problem. Many people will never need the software as they’ll only plug the Powerline adaptors in and leave them alone. However, for those who want to tinker or setup a larger network, it’s there…if you can get it to work.

Out of interest, I tried moving the receiving end around my house and there were variations in the data transfer rate – broadly, the further apart the adaptors were, the slower the rate. However the drop-off was far less than would be expected on wi-fi with very acceptable data rates throughout the building. If you are tempted to upgrade your HomePlug Powerline network, don’t forget that all the adaptors need to be of the same class (AV600) to boost the network speed.

In summary, the TP-Link AV600 Gigabit Powerline Adaptor Starter Kit improves on the previous product generations and provides fast networking via power outlets. The supporting software needs improvement but with on-line prices a little under £60, the kit is still good value.

Thanks to TP-Link for supplying the review units.