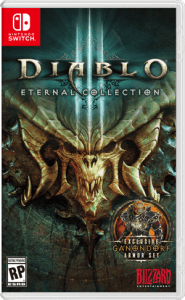 It’s official! Diablo III: Eternal Collection is coming to Nintendo Switch. It will be released in Fall of 2018, but you can pre-order it now.

The Diablo III: Eternal Collection includes the Diablo III game, the Reaper of Souls expansion, and the Rise of the Necromancer pack. Players can choose from 7 classes, play through 5 acts, and receive some Nintendo Switch Exclusives that are not accessible in any other version of the game.

Jump into local, action-RPG multiplayer with up to three friends, and crush demons from your comfiest couch cushions, no internet required – or fill out the ranks of your party online. You can play Diablo III shared-screen on a single Switch, remotely on up to four Switches, or combine TV and handheld play.

Ganondorf Transmogrification Set – Lords of Hell, meet the King (or Queen) of Evil.

Switch-Exclusive Cosmetics – Cucco Pet and Triforce Portrait Frame, plus the Echoes of the Mask Wings

All Diablo III Game Releases – The Eternal Collection includes Diablo III, Reaper of Souls, and Rise of the Necromancer.

Nintendo revealed that The World Ends with You: Final Remix is coming to Nintendo Switch on October 12, 2018. The game was developed by Square Enix and is is a role-playing game. The number of players has not yet been determined.

That’s all Neku knows after regaining consciousness in the middle of a busy intersection without his memories. Now he and his partner must fight to survive a life-or-death game in this twisted tale with more turns than the urban labyrinth of Tokyo they’re trapped in. This definitive version of Square Enix’s RPG classic brings the dark story to life on the Nintendo Switch system along with a new scenario and some killer, new remixed music.

The Nintendo America website says that Neku needs to learn how to work together with a partner to complete the Reapers’ Game. They only have seven days to do it. Right now, it’s unclear if The World Ends with You: Final Remix is going to be a one-player game (where Neku pairs with an non-player character) or if the game will be two-player. The Nintendo website also says: “Take control of real-time, action-fueled RPG battles using touch controls or Joy-Con controllers.”

The World Ends with You: Final Remix is coming to #NintendoSwitch on 10/12! This definitive version of a modern RPG classic will bring a new scenario and some killer, new remixed music. #TWEWY pic.twitter.com/gHAieLk2my 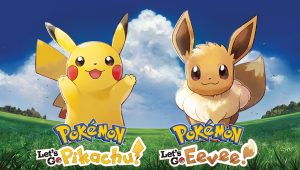 The Pokémon Company International and Nintendo announced three new ways to play Pokémon for Nintendo Switch – Pokémon: Let’s Go, Pikachu!, Pokémon Let’s Go, Eevee!, and the free to start Pokémon Quest. With the addition of these new titles, Pokémon is broadening the scope of video game offerings from the franchise to appeal to its wide variety of fans at all player levels.

With Pokémon: Let’s Go, Pikachu! and Pokémon: Let’s Go, Eevee!, Pokémon is inviting fans on a new journey by taking them back to a familiar setting. Inspired by Pokémon Yellow, which was originally released in Japan on Nintendo’s Game Boy in 1998, these two titles feature many of the intuitive gameplay functions offered to players in the hugely popular Pokémon GO and are designed for players taking their first steps into the Pokémon video game world.

The new games were unveiled in partnership with GAME FREAK, the games’ developers and original creators of the Pokémon franchise. GAME FREAK and The Pokémon Company teamed up with Niantic to bring next-level innovation by offering players the ability to connect their Pokémon GO to their Pokémon: Let’s Go, Pikachu!,or Pokémon Let’s Go, Eevee! game.

Players can catch Pokémon originally discovered in the Kanto region in Pokémon GO and then transfer them into their Nintendo Switch adventure. Something special will also be coming to the world of Pokémon GO, making the connection between both games even more appealing for Trainers.

The Poké Ball Plus, a device that can be used to play Pokémon: Let’s Go, Pikachu!,or Pokémon Let’s Go, Eevee! in place of a Joy-Con or alongside Pokémon GO instead of the Pokémon Go Plus, features motion controls, lights up with a variety of colors, vibrates, and plays sounds. When catching a Pokémon in the Nintendo Switch games, players will be able to feel it moving within the device.

The Poké Ball Plus can be used to allow players to bring one of their Pokémon from Pokémon: Let’s Go, Pikachu!,or Pokémon Let’s Go, Eevee! with them as they explore the real world, giving players the opportunity to spend time with favorite Pokémon even when their not playing the game. Players will receive a variety of rewards once Pokémon are returned to the Nintendo Switch games.

Pokémon: Let’s Go, Pikachu!,or Pokémon Let’s Go, Eevee! will launch on November 16, 2018, exclusively on Nintendo Switch. The Poké Ball Plus will be available at participating retailers on the same day.

Nintendo revealed a list of games that are coming out for Nintendo Switch. The games were revealed in a video that was posted on Nintendo Direct (which has more details).

ARMS is a fighting game where players equip two customizable ARMS per fighter. The ARMS range from standard gloved ARMS to curved weapons like boomerangs. Each ARM has a special attribute like fire, ice, or electricity that activates when delivering a punch. The game can be played as 1-v-1 matches or 2-v-2 matches. A new character, the super-fast, ramen-armed Min Min has been revealed. This character is exclusive to Nintendo Switch.

Splatoon 2: Salmon Run has a new four-player co-op mode. Players can team up to battle the new Salmonid species. When players fail in co-op mode, their teammates can revive them by inking them on the battlefield. Splattoon 2 launches exclusively for Nintendo Switch on July 21, 2017. There are three new amiibo figures for the game – a new Inkling Girl, Inkling Boy, and Inkling Squid – which will all launch on the same day and grant special limited gear in game.

Ultra Street Fighter II: The Final Challengers launches for Nintendo Switch on May 26, 2017. It includes all the classic characters and two new fighters: Evil Ryu and Violent Ken. A “Way of the Hado” mode lets players throw HADOKENS with first-person motion controls.

Minecraft: Nintendo Switch Edition will launch in the Nintendo eShop on May 11, 2017 (and stores on a later date). It includes the Super Mario Mash-Up pack along with new multiplayer play and control options.

An unexpected thing is happening with at least some of the Joy-Con controllers. Nintendo Switch players noticed that when the controllers are used wirelessly, they malfunction in ways that are not conducive to game play. One possible cause is that the player put the Nintendo Switch too close to their aquarium.

Some people have noticed that when they use their Joy-Con controllers wirelessly – the characters in the game seem to move on their own (or the characters don’t respond at all). Others have had problems with Joy-Con responding intermittently, or losing connection with the Nintendo Switch console.

Nintendo released an article about Joy-Con not responding, or responding incorrectly, when used wirelessly. It starts by troubleshooting the typical issues.

Check if your console has the latest updates. Make sure the Joy-Con controllers are charged. Try and decrease the distance between the Joy-Con and the Nintendo Switch console. (In other words – sit closer to it).

If that doesn’t fix the problem, it is possible your Joy-Con is getting interference from something else in your home. Nintendo says it is best if the Nintendo Switch console is placed out in the open.

Make sure the Nintendo Switch is not:

In addition, Nintendo suggests you check for the following sources of interference and turn them off:

According to Nintendo, in most cases it will be enough to move the devices on the list three to four feet away from the Nintendo Switch console and/or Joy-Con controllers. If that doesn’t work for you, Nintendo suggests you power those devices off when you want to use the Nintendo Switch.