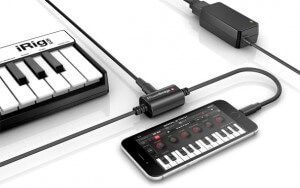 IK Multimedia, a company that puts musicians first, has created the iRig PowerBridge. It is a new charging system for iPhone, iPad, and iPod touch that allows for the continuous charge of the device while using iRig accessories. This allows mobile musicians to practice, perform, and record with their favorite 30-pin or Lightning compatible IK gear anywhere they want and for as long as they want.

The iRig PowerBridge is compatible with the iRig Mic HD, the iRig HD, iRig Keys, iRig PRO and iRig MIDI 2. The iRig PowerBridge combines a power supply and an ultra-low noise power conditioner that connects to a power outlet on one end and a Lightning or 30-pin iPhone, iPad, or iPod touch on the other.

Between both ends is a female Mini-DIN connector that can be used to connect any digital iRig accessory with a Mini-DIN or Micro-USB port. It is a streamlined setup that allows for continuous charging while also passing along audio and MIDI information between the iRig accessory and the iPhone, iPad or iPod touch. An LED display provides at-a-glance visual feedback while charging.

The iRig PowerBridge comes in two versions. One is for Lightning and the other is for 30-pin. Both are available for preorder for $69.99 (excluding taxes). The iRig PowerBridge will ship Q1 in 2015 from music and electronics retailers worldwide and on the IK online store.