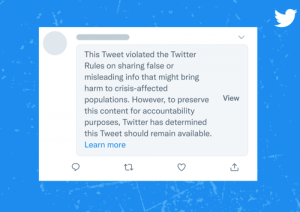 Today, we’re introducing our crisis management policy – a global policy that will guide our efforts to elevate, credible, authoritative information, and will help to ensure viral misinformation isn’t amplified or recommended by us during crisis. In times of crisis, misleading information can undermine public trust and cause further harm to already vulnerable communities.

Twitter continued: Alongside our existing work to make reliable information more accessible during crisis events, this new approach will help to slow the spread by us of the most visible, misleading content, particularly that which could lead to severe harms.

Twitter was extremely specific about what it will misinformation during a crisis. The company stated that to determine whether claims are misleading, they require verification from multiple credible, public available sources. Those sources include evidence from conflict monitoring groups, humanitarian organizations, open-source investigators, journalists, and more.

As soon as Twitter has evidence that a claim may be misleading, the company will not amplify or recommend content that is covered by this policy across Twitter. This includes in the Home timeline, Search, and Explore. Twitter will also prioritize adding warning notices to highly visible Tweets and Tweets from high profile accounts, such as state-affiliated media accounts, verified, official government accounts.

Here are examples of Tweets Twitter may add a warning notice to:

Strong commentary, efforts to debunk or fact check, and personal anecdotes or first person accounts do not fall within the scope of the policy.

I think it is a good idea for Twitter to put a warning on top of Tweets that violate its crisis misinformation policy. Personally, I don’t want to see graphic violence from a war zone when I’m scrolling through Twitter. As such, if I happen to find a Tweet with the warning on top, I will very likely scroll past it without interacting.

The Verge reported that Twitter’s stronger standards are meant to be limited to specific events. Twitter will initially apply the policy to content concerning the ongoing Russian invasion of Ukraine, but the company expects to apply the rules to all emerging crisis going forward.