In a break with its normal release schedule, OnePlus has announced the OnePlus 10 Pro, its new flagship device for 2022. Specs are a little light at this point, but it’s going to be a Snapdragon 8 Gen 1 Mobile Platform processor with a 120 Hz Fluid AMOLED with LTPO display. Dimensions are broadly unchanged from the 9 Pro at 163 x 73.9 x 8.55 mm so expect a similarly sized screen.

The partnership with Hasselblad continues with a triple camera setup (48 MP + 50 MP + 8 MP) with OIS on the rear and 32 MP round the front. As can be seen in the pictures, the camera array with flash is neatly arranged in a square formation.

Keeping it all going on the inside is OxygenOS12 / Android 12 and powering the 10 Pro is a 5,000 mAh battery. As expected on a flagship, the battery can be charged both via wireless (80W) and wired charging (50W), which will fill the battery in short order regardless of connection. Dimensions are broadly unchanged from the 9 Pro at 163 x 73.9 x 8.55 mm.

Two colourways appear to be on offer, a black and green which will undoubtedly be prefixed by some hyperbole: totally-professional-but-boring black and sophisticated-but-in-touch-with-earth green. Actually, I’ve just seen in a tweet from @OnePlus that the colours are Volcanic Black and Emerald Green. Hey, I wasn’t that far off the mark. 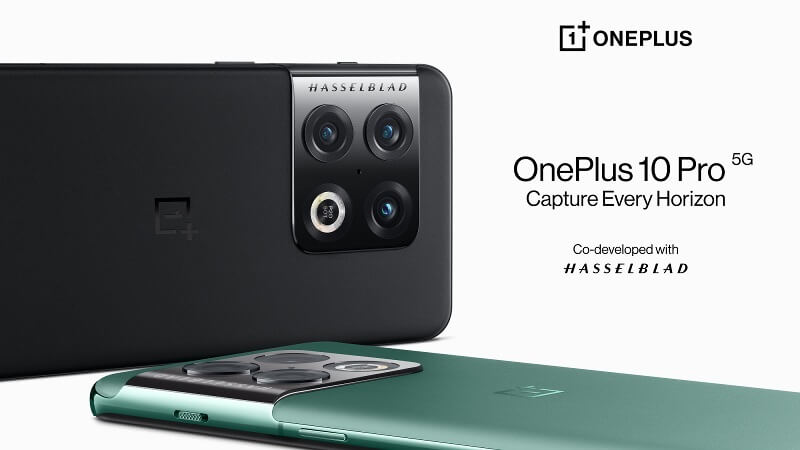 This isn’t the first blip in OnePlus’ schedule but not sure if there’s anything to read into it. OnePlus watchers will remember that there was no 9T in the autumn of ’21 and that the Nord 2 was the new release. There’s never been a T Pro variant, so I don’t think this is a delayed 9T Pro.

Obviously, it’s CES this week and while OnePlus were planning to go to CES, the company withdrew in the end. I think we can assume that the announcement’s a little bit earlier than usual to coincide with the event, but don’t forget that OnePlus loves to dripfeed information to generate buzz so no surprises here. There’s no news on availability or price yet, so that’s still to come.

Mind you, I’d be shocked if there was no OnePlus 10…