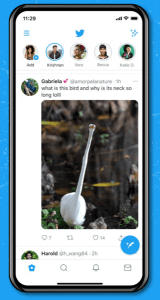 Twitter announced new timeline in a short thread of Tweets on the Twitter Support account. “Edge to edge Tweets that span the width of the timeline so your photos, GIFs, and videos can have more room to shine,” is how Twitter describes it. The Tweet shows an example with several Tweets that show photos, videos, and artwork filling up the majority of the space under whatever a person typed.

It bears a resemblance to Instagram, which was designed for people to post their own photos (sometimes filtered), videos, and other visual media. This is not surprising, since all of the big social media companies have a tendency to copy each other’s homework.

The second Tweet in the thread says: “Video summary: upbeat music plays as the Twitter Home timeline scrolls up to show bold colorful images and GIFs. They begin to animate and expand, showing a new test that will display Tweets and media edge to edge, across the width of the timeline to give them more room to shine”.

The responses to the new edge to edge Tweets includes mostly negative comments. That is to be expected whenever any social media changes how something looks or functions.

However, in this case, I think I can see the problem. If I post a photo, will Twitter animate it – and add music – automatically? Or, would I get to choose whether or not to let it do that? My hope is that there are some buttons or sliders or something that allows a person to choose what they want to happen with the photo they wish to post.

The Verge reported that the edge to edge Tweets are being rolled out to a select group of iOS users. That means those who use the Twitter website should be unaffected by this change for a while.

Another thing to consider is that if Twitter rolls this new feature out to everyone, it could mean that Twitter wants to emphasize photos, art, and videos. I have concerns that some of the more interesting threads will be pushed out of Twitter’s algorithm, in favor of this new thing.